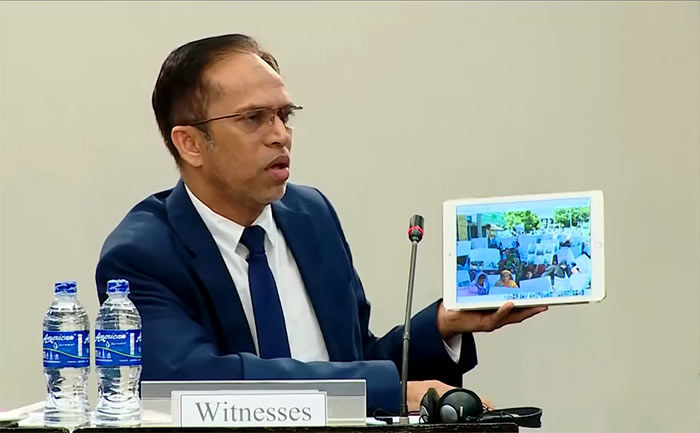 Sirisena was backed by political parties such as the UNP, the TNA, the JVP and the SLMC besides an influential section of the civil society.

Testifying before the PSC, Hisbullah said that he had worked for UPFA presidential candidate Mahinda Rajapaksa in 2015 while Zahran was working against Rajapaksa. “He was supporting Sirisena and he was against me, too,” said Hizbulla

Asked to explain why had said recently that iin Sri Lanka the Muslims were a minority, but globally they were the majority, Hizbulla said his statement had been distorted by media. “My intention was to alleviate fears of Muslim people who are terrified and worried about a backlash. I wanted to encourage people. tThat’s why I told Muslim people not to harbour any fears and reminded them that we might be a minority in this country but in global context, we are the majority.

“I met Zahran Hashim in 2015. He was not a terrorist then. He was a leader of a religious group. He summoned all candidates who contested in our district for a meeting. There he sought our agreement with a list of demands prepared by him. The list contained demands with regard to use of loudspeakers, seating arrangements for women, etc. We all agreed with him. Even Sri Lanka Muslim Congress candidate, UNP and UPFA candidates were there. Becaue we needed his support we agreed to his demands. He could muster 2,000-3,000 votes. Our objective was only obtaining votes.

“At the general election, Zahran worked against me. I couldn’t get around 2,000 votes because of him. I failed to enter parliament as I was short of 121 votes. Then, I was able to secure a national list slot. But Zahran staged protests in the East so that I could not become an MP. I am happy that Zaharan is dead because I can now win the next election without any trouble from his group.

Zahran left the village in 2017 and, thereafter, we didn’t hear of him. We heard of him again only after the Easter Sunday disaster.

Hisbullah said Zahran group members had links to army personnel. There was one person known as Army Mohideen. “I think at that time Mohideen had deserted the army. He worked closely with Zahran group. The army men in our area had close associations with Zahran and his members. One such member was Niaz, a leading member of Zahran’s group.

According to Hisbullah date palms, sign boards in Arabic in Kattankudy had been introduced as a tourist attractions.

Minister Karunanayake: Why are there Arabic boards in Kattankudy where the urban council is run by your supporters? It’s not one of Sri Lanka’s languages …

Hisbullah: That’s true, but there’s no law prohibiting Arabic sign boards, we have put them up to attract tourists from Arab countries.

Minister Karunanayake: Why have you promoted planting date palms there?

Hisbullah: Date palms were grown in Kattankudy as it’s too hot there for other trees to grow.