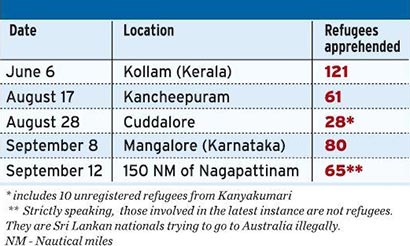 Lured by promises of better conditions in Australia, Sri Lankan refugees or nationals play into the hands of human traffickers

Yet another instance of Sri Lankan refugees or nationals becoming victims of human smugglers has come to the fore with the latest incident off Nagapattinam.

In the last three months, there were four well-reported incidents (see box) of Sri Lankan Tamil refugees, living in camps set up by the State government, trying to migrate illegally to Australia. In all these cases and also the Nagapattinam incident, the destination of these hapless persons was Australia.

Lured by promises of human traffickers that they would be assured of better living conditions, if not comfortable, in Australia, these persons allowed themselves to be used unwittingly for the personal gains of the smugglers. Going by the version of the victims, the payment made to the touts varied from Rs. 30,000 per person to Rs. 1 lakh per person. In the Nagapattinam case, the Sri Lankan nationals had paid SL Rs. 3 lakh to SL Rs. 5 lakh.

“They are all innocent victims of the touts, who would have told them that the journey to Australia was like the one to ‘El Dorado,’” V. Suryanarayan, veteran academic says, adding that “theirs is a tragic story.”

S. C. Chandrahasan, founder of the Chennai-based Organisation for Eelam Refugees Rehabilitation (OfERR), which works in the area of refugees, is sure that those who indulge in human trafficking form part of international networks.

Invariably, the modus operandi of the people smugglers is to take the victims through a boat up to mid-sea, where the victims are transferred to waiting vessels for onward journey to Christmas Island or Cocos (Keeling) Island in the Indian Ocean, northwest of the mainland of Australia. Again, smaller boats are used to reach the mainland.

In fact, an expert panel constituted by the Australian government on asylum seekers stated that since the beginning of 2012, a number of boats carrying Sri Lankan asylum seekers had arrived at the Cocos Islands en route Australia.

Unfortunately, what the victims are not apparently aware is that in Australia the law governing migration was last month amended, tightening the process. The amendment was preceded by the preparation of a report by the expert panel.

The panel report identified Sri Lanka as one of source countries contributing to the majority of irregular maritime arrivals (IMA) to Australia. Stressing that such migration be discouraged, it called for processing of claims of asylum seekers in locations outside Australia.

The expert panel recommended that Australia should move immediately to establish facilities in Nauru and Papua New Guinea (PNG) for the processing of protection claims by irregular maritime arrivals.

A senior official here says the recent spurt in the refugees’ illegal bids to go to Australia could be attributed to the perception that it is better to reach there before the amended law gets strictly enforced. Prof. Suryanarayan says Australia is always seen as one of those countries accommodating migrants.

Apart from the legal complications, these people do not realise before their illegal journeys that many or most of them may not even survive during such ventures. The expert panel’s report has mentioned that 964 passengers had died (or gone missing, presumed dead) on irregular maritime ventures between June 2001 and June 2012.

Of late, the OfERR has taken steps to sensitise the refugees living in the State. Its Director-Advocacy, M. Sakkariyas, says that in his organisation’s interaction with Australian diplomats, it was made clear by the latter that Australia would not accept people trying to come there illegally.

The official says that as regards those refugees caught by the authorities in their attempt to leave illegally for Australia, they are normally readmitted to their respective camps. As for those Sri Lankan nationals rescued off Nagapattinam, the government decided to treat them like refugees. As a perceptive observer puts it, one way to address the problem is that the Union government can provide temporary travel documents to refugees seeking to go abroad for genuine and legitimate reasons such as livelihood opportunities.