How many of the 294,000 Tamils rescued by Sri Lanka Security Forces in May 2009 were really CIVILIANS? 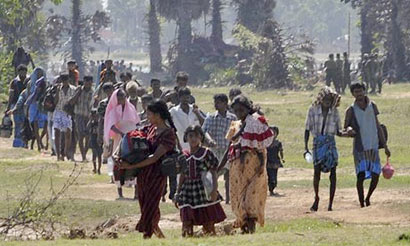 Several developments of late require us to raise some pertinent questions and the questions lead back to May 2009. We are aware that 11,000 LTTE fighters were either caught or surrendered themselves to the Sri Lankan security forces. We are told that the Security Forces saved 294,000 Tamils. What we are not told is how many of these ‘civilians’ were actually civilians or could have been LTTE fighters posing as civilians. The question is important because Gobi who was shot dead did not surrender but posed as a civilian in May 2009 and enjoyed being treated as a civilian in the Ananda Coomaraswamy internally displaced persons camp in Chettikulam. This same ‘civilian’ became a fugitive after shooting a policeman on search operations and was killed by security forces on 11 April 2014. Gobi was not a civilian but a LTTE cadre.

Gobi was killed alongside Appan and Theiveegan/Deiveegan in the jungles of Vedivaithakallu.

The three are accused of attempting to revive the LTTE. Of course they cannot do so on their own which is why the ban on the LTTE/LTTE fronts and naming of 424 individuals/organizations become poignant.

The deaths were a sigh of relief to many including Tamils themselves for they have been recipients of goodwill ever since 2009 with the North seeing development of a scale they would not have even imagined for which the people of the North need to be thankful to the GOSL and in particular to the taxpaying public who will have to foot the bill for the loans taken. Nothing comes free.

The arrests of 65 persons 19 of whom are now released show that investigation sleuths have done their job and those rounded up for questioning were in deed involved in some form of anti-activity.

The anti-terror investigators were correct about the 3 members of the LTTE attempting to revive the LTTE. What the finger pointers will not like to admit is that these three were not attempting to revive the LTTE single-handedly. That the 3 had been in foreign countries since 2009 smacked a mission. The next question was who was ordering the mission given that Prabakaran and the main ground leadership was no more. Obviously, the zigsaw was fitting together and it is now time to admit that LTTE was being steered by entities based abroad. These entities were made up of both locals and foreign players.

If the threesome had established safe houses – where are these located, is it in the North only or are there safe houses elsewhere and in particular Colombo? Are there hidden weapons that are yet to be discovered and if so should the military not conduct an immediate search operation throughout the north combing areas to locate these hidden weapons. The possibilities of the clandestine travels on boats and smuggling arms and ammunition cannot be ruled out as well. With scores of foreign elements bringing in ‘goods’ as ‘donations’ we need to also now wonder how much of these items could be illicit as well. Let us not forget that plenty of arms and ammunition passed through Sri Lanka Customs during the conflict and many officials who have not been netted in have only their conscience to show their guilt.

The most poignant aspect of the situation is that alongside the killing of the 3 in the jungles, the GOSL has banned LTTE/LTTE fronts and named 424 individuals and organizations.

The ban on LTTE fronts exposes numerous leaders operating from overseas many of whom have close ties to foreign parliamentarians. It also highlights the money transfers taking place through money transfer agents and even reputed banks and exposes countries involved – Switzerland, France, Germany, Canada and Great Britain. This insists that the External Affairs Ministry come out of slumber and stop waiting for orders from the President who appears to end up involved in all activities in Sri Lanka while Ministers are making merry doing nothing. This is no time for heroics, everyone enjoying taxpayers hard earned money need to pull up their socks and start working for the country. No one is elected to office to enjoy a term of leisure wasting people’s hard earned money.

Tied to the forged passports, clandestine travelling is the possibility that the numbers being thrown against Sri Lanka as ‘dead’ are those very much alive and kicking in foreign shores and very much known to the very foreign parliamentarians throwing stones at Sri Lanka. The scale of the fund raising and the names involved necessitates the public to realize the seriousness of the possibilities of these same people brainwashing more Gobi’s to take up arms for it is what helps those pulling the strings from abroad to thrive. It is in this context that the ban of LTTE/LTTE fronts that should have come immediately following the LTTE defeat is relevant. This enables Sri Lanka to demand the very foreign governments keeping these LTTE operatives to take legal action against them.

It is now that the real war minus gun has begun. It cannot be a 9 to 5 job for those in the External Affairs Ministry or others in the line Ministries. They must show the same passion of commitment that the forces showed to end terror.

As for intelligence units on ground in Sri Lanka there is a need to align with the Central Bank to investigate how money is coming to Sri Lanka illicitly, who are involved and where the money is going. The entire money supply chain needs to be now exposed. If equipment like cameras, computers, leaflets are being printed those that are involved in providing the facilities need to also be investigated and their units sealed.

That the intelligence units of the state, military and terrorism divisions have been working in synergy has enabled numerous exposures of late. The public need to be included into this network so that they may provide key inputs to gather the remainder of the LTTE stooges now lying low. Obviously, the LTTE operatives were not aware or possibly had miscalculated or perhaps would have thought as is often the case bribes and handouts could silence investigators. That Tamil informants were providing information to the intelligence is something that many would like to keep hushed up though it reveals that the ordinary Tamils are now moving away from following the lies of the upper caste/rich and the TNA. It is also worthy to mention the Tamil military intelligence soldier who died in the operation and who has been promoted posthumously as Lance Corporal and the army instructed to construct a house for the dead soldiers family in Kurunegala.

We are yet to know still how many of the close to 300,000 Tamils the security forces saved were actually civilians. The UN Secretary General and international agencies are quoted appealing to the LTTE not to use civilians in combat operations. This is a clear indication that civilians were used by the LTTE either voluntarily or by force. Civilians that help terrorists in terrorist activity have no legal basis to demand rights and privileges as a civilian. How many of the 300,000 we would like to know lost this legal right for in losing that right they cannot be termed as a civilian (dead or alive). This is a fact that people need to accept whether they like it or not. It has legal provision and is something the authorities have not argued upon in responding to the allegations of ghost numbers being thrown at the GOSL. Moreover, the authorities need to next ask from the foreign governments how many forged passport holding Tamils are living in their countries for these numbers could easily provide for the ghost figures they are quoting especially since none of the 40,000 or even 200,000 dead families have even come forward to name the dead.

With the continued chirping of ‘reconciliation’ by quarters that currently allow banned LTTE fronts to prevail while quoting ghost figures knowing that scores of LTTE members are living clandestinely in their territory the whole post-conflict peace scenario is looking a farce and one-sided to say the least.

What needs to be categorically stated is that reconciliation cannot come from one party alone and with the proven ground realities of LTTE revival lurking amidst us it behoves the state apparatus not to commit anything before the foreign governments come through on concrete action against the LTTE diaspora members holding portfolios in the LTTE fronts being banned and the GOSL itself does not ignore the links to LTTE of people living in Sri Lanka irrespective of whether they belong to the TNA, the Tamil polity, the Sinhalese, Muslims, NGOs, Media, diplomats. If we are to ask foreign governments to take action against these LTTE and LTTE fronts as well as individuals and organizations we now demand that all those directly and indirectly who had been linked to LTTE terror, LTTE separatism and LTTE ideology should all be roped in, investigated and charges filed against them under the country laws very much in place.

1 Response to How many of the 294,000 Tamils rescued by Sri Lanka Security Forces in May 2009 were really CIVILIANS?

Home » How many of the 294,000 Tamils rescued by Sri Lanka Security Forces in May 2009 were really CIVILIANS?