Human rights an essential element of Sri Lankan future: US 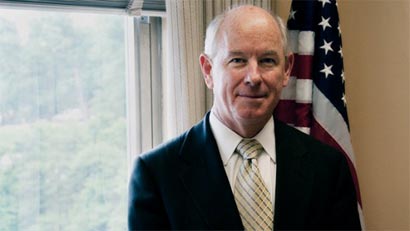 Noting that human rights is an essential element of Sri Lanka’s future, US has said that the Rajapaksa Government should use the post-LTTE situation to establish a new dynamic relationship with its people.

“We’ve stressed in Sri Lanka many times, there’s an important opportunity here to change its relations with its population and subgroups within its population,” State Department spokesman PJ Crowley, told reporters.

“Human rights is an essential element of Sri Lanka’s future and it should take the opportunity, co-operate broadly, and establish a new dynamic and relationship with its people,” he said in response to a question.

Crowley was responding to questions about the decision of the Sri Lankan Government not to allow a UN panel to enter the country to investigate alleged human rights abuses during the last stages of the country’s civil war.

When asked if this is the right time for the UN to go in and have its own investigations, Crowley said: “That’s a matter for the UN.”

Following the UN’s announcement early this week, the US Ambassador to UN, Susan Rise in a statement had urged Sri Lanka to take advantage of this UN’s Panel’s expertise.

“The US supports a robust accountability process that will provide a durable foundation for national reconciliation and the rule of law in the aftermath of Sri Lanka’s decades-long conflict,” Rice said.

“To that end, the US welcomes UN Secretary General Ban’s announcement of a panel of experts to provide advice on relevant best practices for investigations into the alleged violations of international human rights and humanitarian law,” she said.

“To be successful, Sri Lanka’s domestic “Lessons Learnt and Reconciliation Commission” should apply the best practices from similar commissions in other countries and the government of Sri Lanka should give serious consideration to its Commission’s recommendations,” she said.

“We strongly urge the Government of Sri Lanka to take advantage of this UN Panel’s expertise,” Rice said.

3 Responses to Human rights an essential element of Sri Lankan future: US