“If Ranil leaves, the SLFP will step in and continue” – Rajiva Wijesinha 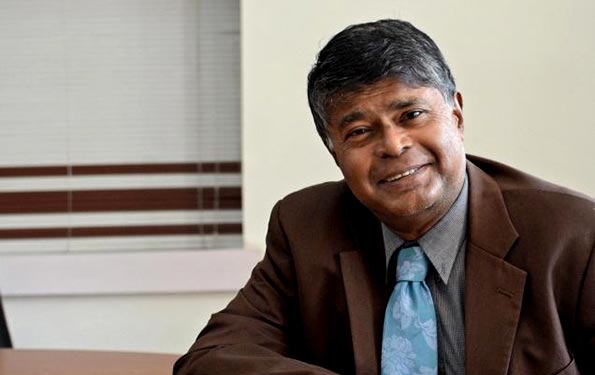 Parliamentarian Rajiva Wijesinha is no stranger to controversy. A State Minister in the yahapalana government that took office in January, he was the first to cross the floor and rejoin the opposition. Though he has fallen out with what he describes as a UNP government, he remains combatively loyal to president Maithripala Sirisena. In this interview, Rajiva speaks to C.A.Chandraprema about the difference between RW and MS.

Q. How would you briefly describe your experience of the yahapalana government in the short time that you were in it?

A. The major problem is Ranil Wickremesinghe. He is JR’s creation which means a lack of morality and a certain ruthlessness. In a Westminster style system you don’t get rid of your rivals in the party. If they are able, they get a position. There was a promise that I would be in the cabinet and I told the president this. He told me that I should talk to Chandrika and to Ranil as it is they who decide on the cabinet but nothing came of it. There is really no one to argue with Ranil in cabinet except Rajitha and Champika. Rajitha was very good at getting the transfer of powers from the president to the prime minister stopped. But you need a critical mass. M.K.D.S.Gunawardene is upset about what is going on, but he cannot argue in cabinet. This is supposed to be a coalition government but in reality it’s not. It’s a UNP government which happens to have two or three outsiders in it. Kabir Hashim was appointed cabinet minister of higher education above me. There is no point in having a position where you can’t work. FUTA (The Federation of University Teachers’ Associations) had a meeting with Ranil and later Kabir informed me that he had written to the president recommending the removal of the UGC chairperson…

Q. What bugged you the most, was it the turf war between you and your cabinet minister or the principle behind the removal of the UGC chairperson?

A. Both really. If there is a State Minister he should have been consulted on a decision like that. We could have discussed the matter. FUTA announced that the prime minister had said that the UGC chairperson would be removed and a letter would follow from the president’s secretary. What you don’t do is to ask someone to resign because of pressure from FUTA. Once something is done without consulting you, that will become a routine practice. I was even told that the UGC has to be reconstituted and that there are lists in the prime minister’s office and that I should go and have a look. I said that this is not a political matter so why should there be lists of potential candidates in the PM’s office? Basically what we should be doing is looking for the best people and anyway, the prime minister should not be involved as it’s the president who appoints members of the UGC.

Q. That brings us to an interesting point. You said earlier that people like Champika and Rajitha Senaratne were taking the lead in not allowing the transfer of power from the president to the prime minister. But before the election when Maithripala Sirisena came to Sirikotha he told the assembled UNPers that even after becoming president he will continue to address Ranil as ‘Sir’. Then he said that he was not going to step into any of the presidential residences. All that was said to convince the voter that he was going to dismantle the executive presidential system. He signed MOUs with many parties saying he was going to abolish the presidency and with the JHU saying that only certain powers of the executive presidency would be reduced. People like Jayampathy Wickremeratne and the other NGO activists who backed the yahapalana campaign want it abolished. Why are you, a liberal, in favour or retaining the executive presidential system?

A. The Liberal Party was the first to say that the presidency has too much power. That situation was exacerbated by the removal of term limits through the 18th Amendment. In 2013, the Liberal Party came to the conclusion that the presidential powers should be pruned but the institution retained. But I don’t have any objection to abolishing it.  When we were preparing the manifesto Jayampathy Wickremeratne said that we are committed to abolishing the executive presidency and that legislation is being drafted to transfer power to the prime minister. I said that such an arrangement was immoral and that I can’t ask people to vote for Maithripala Sirisena in order to make Ranil Wickremesinghe the leader of this country.

A. That was never the position of the coalition. In any coalition people are going to say different things.

Q. Everybody who spoke of the powers of the executive presidency wanted the institution scrapped not to have its powers pruned.

A. That’s not true of everybody. That is true of some people including Jayampathy. The point that I wanted to make was that the removal of excessive powers does not mean the transfer of excessive powers. My point was that if the powers of the executive president are being removed you do not give them to another executive.

A. Over the past several years, Ranil did not get anything more than 35% of the vote. Many people are emphatic on the point that they voted for Maithripala. The UNP is now going around and saying that Maithripala won because of them.

Q. I would be inclined to agree with that.

A. I am sure you would. You would in fact have liked Mahinda to win wouldn’t you?

A. You’re very frank about it. I think you were wrong in terms of the interests of the country. But the more hype there was about Ranil being the prime ministerial candidate, the less inclined would people have been to vote for Maithripala. Mahinda Rajapaksa had based his campaign on the assumption that Ranil Wickremesinghe would be the candidate. So it was in the interests of people like you and Dayan to present this as a battle between Mahinda and Ranil. If that was the case, we would have lost. I find it intriguing that you and Jayampathy are on the same side on this because it will be Mahinda who benefits. If Ranil Wickremesinghe is given all the powers now, all that Mahinda has to say is “Right chaps, I’m the only one who can defeat him”. Mahinda may have a little competition from Chandrika who will make the same claim but if it comes to Mahinda vs Chandrika Mahinda will sweep the board. I am protecting Maithripala Sirisena from the three people who I believe are unfit to be leaders of the country – Ranil, Mahinda and Chandrika!

A. Once you are appointed to a position, you have to act in the interests of the whole country. There should be a UNP prime minister in recognition of the fact that they worked hard. If Ranil leaves in high dudgeon, I suppose the SLFP will step in and continue. I believe that until we have fulfilled at least 60% of our yahapalana pledges, we should not have an election.

Q. Given the fact that it was RW who personally took the decision to field Maithripala as the common candidate it is up to Maithripala to see to it that RW does not leave the government.

A. Ranil withdrew from the candidacy because the UNP told him you can’t win. Till the last minute he wanted to contest. The vital thing is to get rid of some of the executive powers of the presidency. If someone insists on getting all powers removed, the possibility is that they would end up with nothing.

Q. If the UNP leaves in ‘high dudgeon’ as you put it, where would Maithripala Sirisena’s mandate to govern come from?

A. It will come from the fact that the vast majority of the old SLFP members were deeply disturbed at the authoritarian tendencies of the Rajapaksas and they think Maithripala is a blessing.

Q. But the SLFP didn’t give Maithripala a mandate to govern.

A. The whole point is that mandates shift. Chandrika won a mandate to govern in 1999 and it shifted in 2001 to the other side.

Q. In that case you will have to have an election to see where the mandate to govern now lies.

A. Rubbish! The president is elected by the people for a six year term he picks the person who can command the confidence of parliament as the prime minister. If at some point this person loses that confidence the president has every right to find someone else.

1 Response to “If Ranil leaves, the SLFP will step in and continue” – Rajiva Wijesinha

Home » “If Ranil leaves, the SLFP will step in and continue” – Rajiva Wijesinha