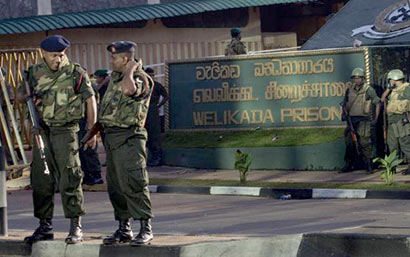 Sri Lanka granted India consular access to its prisoners at the Welikada prison, the site of bloody clashes that left 27 dead and over 40 injured on Friday. High Commission officials made a physical verification of the 39 prisoners and said that they were all unharmed.

“Our officials met all the Indian prisoners. One had irritation in the eye. Apart from that all the other 39 prisoners were unharmed during the clashes,” the Indian High Commissioner to Sri Lanka, Ashok K Kantha told The Hindu on Monday. One prisoner completed her sentence and was moved on Monday to the detention centre for repatriation to India. Asked about the delay in their repatriation, Mr.Kantha said that all paper-work had been completed.

The prisoners narrated to Sunil Achayya, a High Commission official, their harrowing experience as they waited in their ward for the problems to end. The convicted prisoners were in one block and the five fishermen from Tamil Nadu, remand prisoners, were in another block. The fishermen had arrived just last week from Jaffna, ahead of their first hearing in a Colombo court and were not aware of the lay-out of the prison.

A few among the convicted Indian prisoners took upon themselves the challenge of tracing them, and shifting them to the block where the Indian convicts were lodged. This obviously meant braving bullets, crawling for long stretches across gravel and concrete and reaching the fishermen, even as shooting began to get worse. Then, the small team of prisoners made their way back to the ‘Indian corner’ and the fishermen from Thangachimadam near Rameswaram, heaved a sigh of relief – there are 27 Tamils in the group of convicted prisoners.

The Indian prisoners, who were also friendly with their two Pakistani counterparts, three Iranians and an Afghan, convinced them all that chances of survival were better if they all stuck together. It was unclear how they communicated as a group, but the instinct of survival seems to have cut through languages and dialects: they all stayed together as a group, sprawled on the floor, and kept their heads down. As a group, they decided that survival was more important than finding out what was going on in the vicinity. When the soldiers came for them, more than six hours later, all of them were in the same position; they had not stirred for anything. One prisoner who had spent more than a decade in prison said: “These few hours seemed longer than the 10 years I have spent inside.”

For the first time, the Indian High Commission is arranging delivery of food packets for them on Diwali day, Tuesday, through prison authorities.

Meanwhile, the Asian Human Rights Commission (AHRC) has written to the Special Rapporteur on extrajudicial, summary or arbitrary executions, Office of the Commissioner for Human Rights, Geneva, on the killings in the Welikada Prison.

AHRC quoted family members of the prisoners claim as saying that they received telephone calls from their relatives inside the prison at around 4 am on November 10. “The prisoners informed their family members that they were being taken for questioning. Later these same prisoners were found dead of gunshot injuries. According to reports about 11 persons were killed in this manner after being taken for questioning,” it said.

Recalling similar prison uprisings in the recent past, AHRC said that in two other raids of similar nature; one at the Magazine Prison and another at Vavuniya Prison, there was violence, leading to the death of prisoners. “There has not been any credible inquiry into either of these incidents,” it said.

Sri Lanka dismissed suggestions that prisoners were murdered in cold-blood. The Military spokesperson Ruwan Wanigasooriya told The Hindu that the Army acted with restraint and followed standard operating procedures. “Troops did not act indiscriminately. It was a small unit of professionals who went in and contained the situation in under two hours. By 8.20 am [on Saturday] we handed over charge back to the prison authorities,” he added.