Is Rs.2500 enough to survive? – Bandula and Ravi debate tonight 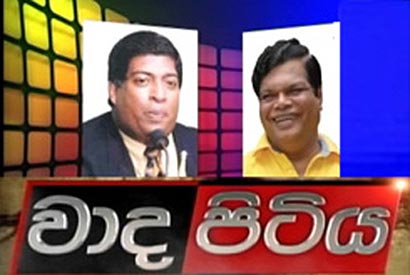 Education Minister Bandula Gunawardena and UNP MP Ravi Karunanayake will go head to head tonight (April 3) to debate the Minister’s claims that Rs.2500 a month is enough for a person to survive. The debate will take place tonight at 9.45pm on the Wada Pitiya programme on TV Derana.

Minister Gunawardena stated a few days ago that Rs.7500 a month is enough for a family of three to survive with while stating that Rs.2500 is more than enough for one person.

In reply to questions put forward by the media regarding his theory, the Minister stated that he was ready to debate this issue with anyone who had passed A/L economics and has a degree in the subject.

The leader of the New Leftist Front, Prof. Wickremabahu Karunaratne, JVP MP Sunil Handunetti and UNP MP Ravi Karunanayake all expressed their interest in taking up the Minister’s challenge.

However, Minister Gunawardena only stated his interest in debating with MP Karunanayake.

1 Response to Is Rs.2500 enough to survive? – Bandula and Ravi debate tonight