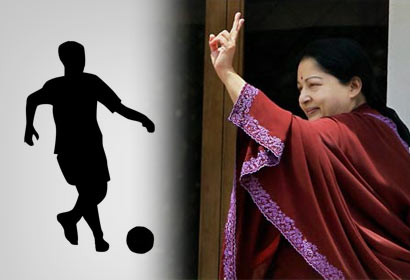 The racist Chief Minister of Tamil Nadu Jayalalitha went into frenzy when she learned that Sri Lankan school kids are scheduled to play friendly soccer games with Tamil Nadu school kids and in a rage has ordered suspension of the stadium officer of the Jawaharlal Nehru Indoor stadium in Chennai for allowing football players from Sri Lanka to play a friendly match with the customs team.

She has also ordered some Sri Lankan school kids in Chennai to immediately fly back to Sri Lanka before playing the friendly soccer games.
The overtly anti Sinhala former actress turned Chief Minister who is popularly and ironically known as Amma, the universal symbol of love has surprised many for bringing in her hate politics to hurt kids playing innocent friendly games of soccer. She had gone berserk and issued directions to send the team back to Colombo.

In a statement in Chennai, the Chief Minister said she had also issued orders for sending back eight students and coach of the football team of the Hilburn International School from Ratnapura in Sri Lanka. The school team is in Chennai to play matches with Velammal Higher Secondary School.
Ms. Jayalalithaa said Indian government had granted permission to the Sri Lankan football team to play friendly matches in Tamil Nadu to improve their skills. “The decision of the Indian government had humiliated the people of Tamil Nadu and I condemn the Centre for this,” she said, adding that the permission had been given at a time there was a growing discontent against training being given to the Sri Lankan Army officials in Wellington.
The Chief Minister said the football team had come to Tamil Nadu after Royal College of Colombo showed interest in playing friendly matches. The college had contacted an official of the Reserve Bank of India and the officer had made the arrangement. The team arrived in Chennai on August 30 and played a match with the Customs team in the Jawaharlal Nehru Indoor Stadium.

“When I inquired into the matter, I was told that the Reserve Bank official had sought permission from the stadium officer and he had orally granted permission. The stadium officer has no power to allow matches in the indoor stadium and only the State Sports Development Authority (SDAT) has been invested with the power to allow matches,” Ms. Jayalalithaa explained, the Hindu reported. Her out of wedlock union with the late M.G.Ramachandran did not produce any children but it allowed her to rise up in the corrupt Tamil Nadu politics.

She said by allowing Sri Lankan football team to play in the stadium, the stadium officer had hurt the sentiments of the Tamil people.
Ms. Jayalalithaa alleged that instead of taking action on the resolution adopted in the state Assembly seeking rehabilitation of Tamils living in camps and restoration of rights on a par with the Sinhalese, the Indian government was ignoring the aspirations of the Tamils by providing training to the Sri Lankan Army.

Though she urged the Centre to send back the two Army officials to Sri Lanka, the Indian government had not pay heed to her demand, she said.
A Sri Lankan parent said Jayalalitha’s action reminds what the Buddha preached about Brahmins: One does not become a Brahmin by birth alone but by one’s action. Her action against school kids could become her swan’s song, she said.