Kevin Rudd must up the ante on Sri Lanka 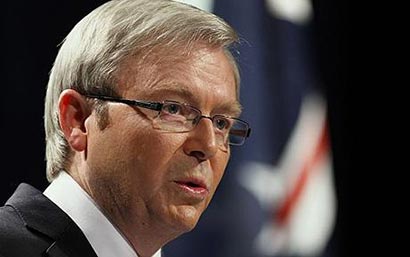 As nations such as Canada and Britain weigh in on accountability for war crimes in Sri Lanka, it’s time for Australia to add its voice. After all, promoting human rights is a crucial part of foreign policy, as Foreign Minister Kevin Rudd is keen to say.

A month ago the Sri Lankan government’s Lessons Learnt and Reconciliation Commission issued its long-awaited report. The commission was established by President Mahinda Rajapaksa in May 2010 to deflect mounting international pressure on accountability for alleged war crimes in the final months of the conflict with the separatist Liberation Tigers of Tamil Eelam.

As the UN Panel of Experts reported last April, tens of thousands of civilians were killed during that period, largely from indiscriminate shelling by government forces. Government forces were also implicated in extrajudicial killings, torture and the shelling of protected places such as hospitals, while LTTE abuses included using civilians as human shields, shooting people who tried to escape and forcibly conscripting child soldiers. Nearly three years after the conflict ended, in May 2009, there is still no accountability for any of these war crimes.

In the end, the commission’s report is disappointing. It discounts the worst government abuses, such as footage of summary executions of prisoners by uniformed soldiers shown in the British Channel 4 documentary Sri Lanka’s Killing Fields.

Though four independent experts told the UN the footage was genuine, the commission cast doubts on its authenticity and recommended further forensic testing. More surprising, while the commission concluded there were civilian casualties, it did not call for investigations into indiscriminate attacks.

The report rehashes longstanding recommendations on accountability from previous government commissions. There is no reason to believe the government will carry them out now, since it never has before. In short, the report does not advance accountability for victims of Sri Lanka’s armed conflict. Its serious shortcomings highlight the need for an international investigative mechanism into the wartime abuses, as the UN Panel of Experts recommended.

Last year, after Killing Fields aired on Australian television, Rudd called on the UN Human Rights Council, which at war’s end had publicly dismissed the possibility of government abuses, to reconsider its findings.

“I believe their deliberation on it was inadequate,” he said. “And I would call upon – as does the Australian government through its mission in Geneva – the Human Rights Council to revisit this matter.” He concluded that “no one watching this program could emerge from that undisturbed, and we don’t either”.

At the Commonwealth Heads of Government Meeting in October, when Sri Lanka’s fitness to hold the next meeting was raised, Julia Gillard said: “On the question of human rights abuses and allegations of those abuses in Sri Lanka, the government’s position is we have consistently raised our concerns about human rights questions in the end stage of the conflict. These need to be addressed by Sri Lanka.”

Australia’s relationship with Sri Lanka has been somewhat complicated by the boatloads of ethnic Tamils heading to Australia and Australia’s co-operation with the Sri Lankan government to prevent people-smuggling. But Canada has faced similar issues, and this has not stopped Canada from speaking out strongly about accountability.

With a Human Rights Council session approaching next month, now is the time for the Australian government to show leadership in calling for the issue to be re-examined and assessing the need for an independent, international investigation.

Canada and Britain have issued statements expressing concern the LLRC’s report does not address the serious allegations of war crimes and calling for a credible independent mechanism. The Sri Lankan government has made it clear that it is not willing to impartially investigate these war crimes. So the international community needs to step in.

In April 2010, Australia issued a Human Rights Framework, saying the government will seek to “improve the protection and promotion of human rights at home, within our region and around the world”. While Rudd has spoken out strongly on Syria and Libya, he should show the same attention to human rights issues in Australia’s own region, and Sri Lanka would be the perfect place to start.

Home » Kevin Rudd must up the ante on Sri Lanka