Lanka, Maldives under scanner as transit point for terror 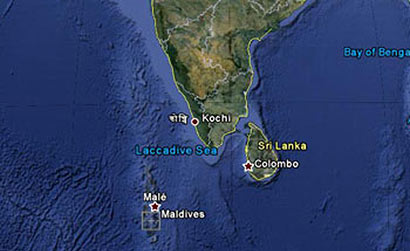 NEW DELHI: Sri Lanka and Maldives are under the scanner of India’s security establishment as sources and transit points for Pakistan-supported terror elements who may be used to target vital installations in southern India.

Sources here said both countries were well aware of the emerging developments and have been coordinating more carefully in recent times. Maldives is a place of particular concern because of the radical elements, many of whom got indoctrinated in Pakistan.

This was brought to sharper attention after a Sri Lankan national, Shakir Husain, arrested in Chennai last week. He reportedly admitted to conducting surveillance of US and Israeli consulates in Chennai and Bangalore, something David Headley had done before the 26/11 Mumbai terror strikes. Hussain’s arrest, officials said, was a multi-national operation, including Sri Lanka and a southeast Asian nation. Police told a Chennai court on Monday Hussain had made almost 20 trips to India on reconnaissance missions and had apparently kept Indian Navy’s Kochi and Vizag ports under his radar.

Indian officials are now being extra careful with Afghan nationals coming to India for medical treatment or vacations, holding Indian currency from in Kabul. On condition of anonymity, some officials said Afghan travellers were being tricked with fake currency, which they believed was being distributed by Pakistani agencies. Indian hospitals and establishments catering to Afghans have been instructed to receive payment either by cheques or card, or with proper documentation that the cash was procured in India.

While Indians have traditionally focused on north India as points of infiltration by Pakistan-supported elements, south India poses a particular danger. Officials claimed the arrested Lankan had told them that he was hired by a diplomat in the Pakistani high commission in Sri Lanka to facilitate the arrival of two people from Maldives to Chennai. Indian agencies reckoned they may be used for terror attacks.

Home » Lanka, Maldives under scanner as transit point for terror