Lanka will work with new Libya 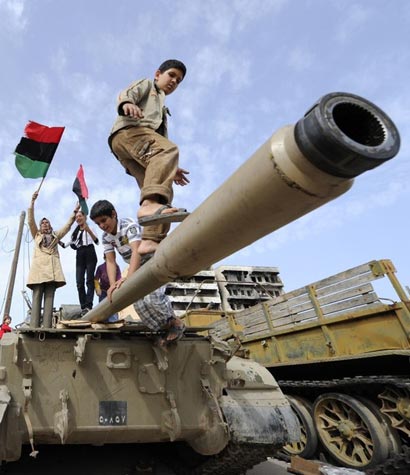 Sri Lanka yesterday called for a peaceful transition of power in war wrecked Libya adding that Colombo was ready to work with the new establishment, a senior official of the External Affairs Ministry (EAM) said.

He said the Government was ready to establish full diplomatic ties with Libya’s new administration since it has already been recognized and welcomed by most contries.

The official said Sri Lanka hoped the transition of power would be carried out in a peaceful manner and that it was the responsibility of the new authorities to prevent revenge attacks on loyalists of the former strongman Muammar Gaddafi.

“At this point Colombo has no option but to back the new regime in Libya for the better interests of this country. We must also keep in mind that most international organizations have already recognized the National Transitional Council (NTC),”EAM’s Publicity Director Sarath Dissanayake said.

He said Sri Lanka which maintained close ties with the Gaddafi regime was one of the last to pull out from Tripoli as fighting between the rebels and Gaddafi loyalists raged over the past few months.
“We have still not made any contact with the new administration in Tripoli since the situation in that country is still confusing and law and order is yet to be established. However Colombo is ready to make contacts as the first signs of normalcy return to that country,” Mr. Dissanayake said. An estimated 1000 Sri Lankans were employed in Libya before fighting broke out in April. They were later evacuated. Libya had pledged to provide an estimated 20,000 more jobs for Sri Lankans following a visit to that country by President Mahinda Rajapaksa in 2010. The unrest broke out shortly after that. Apart from that, Gaddafi’s Libya was also the second biggest buyer of Sri Lankan tea and a reliable arms supplier to the government during the war with the Liberation Tigers of Tamil Eelam (LTTE).

MISRATA, Libya, Oct 21 (AFP) – Military commanders in the Libyan city of Misrata said today that no post-mortem would be carried out on the body of Muammar Gaddafi despite concerns over how the toppled dictator died.

Interim leader Mustafa Abdel Jalil said an investigation was being conducted into the circumstances of Gaddafi’s killing following his capture, bloodied but still alive, during the fall of his hometown Sirte on Thursday, after several foreign governments and human rights watchdogs posed questions.

But the military leadership in Misrata, where Gaddafi’s body had been stored in a vegetable market freezer overnight and was again put on display for hundreds of curious onlookers on Saturday, insisted the inquiry would involve no autopsy.