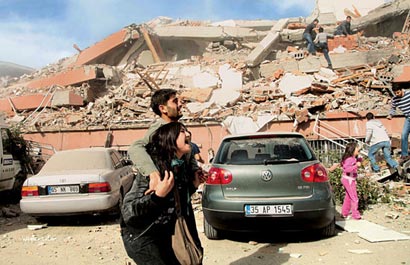 An earthquake of 7.3 magnitude rocked eastern Turkey Sunday, with a seimological institute estimating up to 1,000 people could lie dead under the rubble of dozens of collapsed buildings. The powerful quake, the strongest to hit the country in years, and its aftershocks struck Van, a large eastern city populated mainly by Kurds.

“500 to 1,000 people are estimated to have been killed in the quake,” Professor Mustafa Erdik, director of the Kandilli seismological institute in Istanbul, told a news conference.

Earlier reports did not speak of casualties but many were feared trapped under the rubble of collapsed buildings and officials warned they were struggling to assess the extent of the damage.

At least 50 people were taken to hospital in Van, Anatolia news agency said.

“There is serious human and material loss,” said a brief statement from the the national disaster body which is based in the prime minister’s office.

“Many multi-floor buildings, hotels and a dormitory collapsed,” said Veysel Keser, a local official from Van.

“We can hear voices from the collapsed buildings,” he said.

Television footage showed collapsed buildings and vehicles, with residents rushing in panic in the streets.

“People are panicked. The telecommunication services have collapsed.

We cannot reach anybody,” Van Mayor Bekir Kaya told the NTV television in an initial assessment.

The government is due to send satellite phones to the region, according to media reports.

The army will also send search and rescue teams to the area. The US Geological Survey measured the quake at 7.3 magnitude and said that an aftershock was of 5.6 magnitude had also been registered.

The epicentre of the aftershock, which occurred at 1056 GMT, was located 19 kilometers (12 miles) northeast of Van, the institute added.

The epicentre of the quake, which struck around 1041 GMT, was at Tabanli in Van province, the Kandilli institute said.

The Turkish institute said that there were two aftershocks which in particular impacted on Ilikaynak and Gedikbulak villages.

Prime Minister Recep Tayyip Erdogan has cancelled his official programme and was due to visit the quake region on Sunday, said NTV.

The city airport received damage from the quake, reported the Anatolia news agency but added it did not disrupt the air traffic, quoting civilian airflight authorities.

Van, a city of 380,000 inhabitants mostly Kurds, is located more than 1,200 kilometres from the capital Ankara. The quake was also felt over the border in northwest Iran, causing some panic in major cities, Iranian media reported, but without any mention of casualties or damage.

The tremors were strong enough to cause “scenes of panic among the population of the cities,” according to several Iranian media.

Turkey is earthquake-prone due to being crossed by several fault lines.

In 1999, two strong quakes in the heavily-populated and industrialised regions of northwest Turkey left some 20,000 dead. And a powerful earthquake in the town of Caldiran in Van province killed 3,840 people in 1976.
AFP