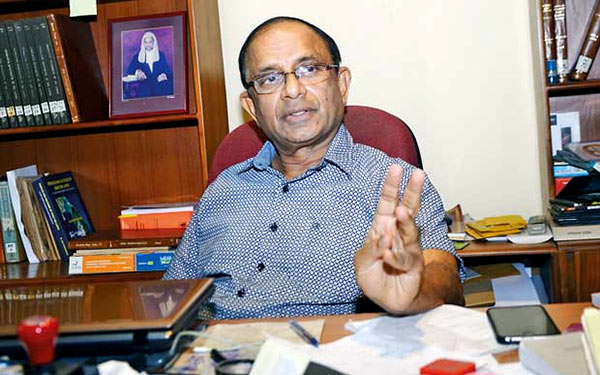 There is no lacuna or provision in the 19th Amendment and its application for legal arguments to be made that former President Mahinda Rajapaksa is eligible to contest in the upcoming 2019 presidential election, a top constitutional expert said, amid frantic attempts by the Joint Opposition to push for a third term for the controversial ex-President.

The 19th Amendment to the Constitution has no retroactive effect, Dr. Jayampathy Wickremaratne, PC and MP told the Sunday Observer yesterday.

“Neither former presidents Chandrika Kumaratunga nor Mahinda Rajapaksa could contest for a third term, according to the law brought in by the 19th Amendment, he added. “If either Chandrika Bandaranaike Kumaratunga or Mahinda Rakapakse had been elected President on January 8, 2015 and the 19th Amendment was enacted on May 15, 2015, then the disqualification would not have applied in the current term as the election had already been held.”

To explain the very technical legal point further, Dr. Jayampathy Wickremaratne used the example of former MP Basil Rajapaksa. The 19th Amendment also brought a disqualification for being a member of Parliament on persons holding dual citizenship, he said.

“Now, Basil Rajapakse, who is said to be a dual citizen, was a Member of Parliament when the 19th Amendment as enacted. But that did not apply to him as he had been already elected. But he is disqualified from being elected thereafter. The same principle applies here as well,” Dr. Wickremaratne explained.

Leader of the Sri Lanka Podujana Peramuna (SLPP), Prof. G.L. Peiris last week said he will seek the opinion of the Supreme Court on whether the former President Rajapaksa could seek a third term. However, the 19th Amendment to the Constitution revived a disqualification that was in the original 1978 Constitution which said, “No person who has been twice elected to the office of President by the People, shall be qualified thereafter to be elected to such office by the People”.

This disqualification was deleted by the Eighteenth Amendment introduced by the Mahinda Rajapaksa government in 2010. The 19th Amendment additionally brought in a disqualification for a dual citizen, to run for parliament or presidency. Several mainstream Sinhala language newspapers floated the theory over the weekend, as the SLPP/JO grapples with putting a lid on its ‘candidate crisis’ by putting the party’s standard bearer back in the fray.Speaking to the Sunday Observer, SLPP Chairman Prof. G.L. Peiris confirmed the pro-Rajapaksa faction was thinking along those lines. Legal experts were of the view that the prohibition contained in the 19th Amendment has operation only for the future and not for the past.“The Amendment has no retrospective application,” Prof. Peiris said.

The SLPP Chairman means that the two term limit will apply only to presidents who are elected to office after the enactment of the 19th Amendment and not to those who have held the office before. Dr. Wickremaratne disagrees. “The 19th Amendment came into force on May 15, 2015. Therefore, the disqualification will apply to all Presidential elections held after that date,” the senior constitutional lawyer explained. Prof. Peiris said there were ways to obtain ‘authoritative clarification’ on the matter. He said it would be likely that the clarification will be sought from the Supreme Court, by the SLPP or any voter in the country.Meanwhile, the Sunday Observer learns that one proposal currently being floated within SLPP inner circles is for the former President to simply hand over nominations to the Elections Commission when the presidential election is declared.

Some sections of the SLPP believe this will force the Commission to seek an interpretation of the 19th Amendment from the Supreme Court, triggering a major constitutional crisis ahead of a key election. However, legal experts dismissed the theory. If the former President submits nominations, the Election Commission would have to reject the application as being invalid in terms of the Constitution, said Viran Corea Attorney-at-Law.Since the meaning of the text of the 19th Amendment was unambiguous on plain reading, it does not warrant ‘interpretation’ in the involved sense of the word,” Corea explained.