Maithripala will not step into President’s House ‘after victory’ 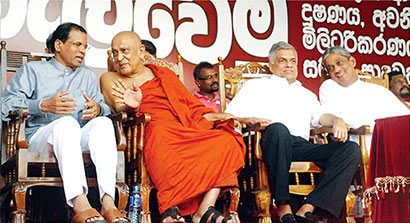 The Joint Opposition’s Presidential candidate Maithripala Srisena said yesterday that he would win the January 8th Presidential Election but would not step into the President’s House since he was committed to abolishing the Executive Presidency within 100 days.

Addressing a campaign meeting at Hyde Park in Colombo, Srisena, who recently resigned as SLFP General Secretary and Health Minister, said that he was on a mission to rescue the country from the abyss it had fallen into in the post conflict era with chaos and unprecedented lawlessness and corruption griping the country.

“When I am elected President on January 8, I will not go to the President’s House. It is not a place for me because I am seeking a mandate from all Sri Lankans to abolish executive presidency within 100 days of my election and replace it with a parliamentary system of government where the legislature would elect the Prime Minister,” Srisena, who has picked the Swan as his symbol, pledged.

Sirisena noted that among other matters of priority would be the reintroduction of Independent Public, Elections, Police, Judicial Service and Bribery and Corruption Commissions which were abolished by the 18th Amendment to the Constitution.

A Right to Information Act and changes to the electoral system would also be speedily implemented, Srisena observed.

Emphasising that he was not overcome by the greed for power or revenge, the former SLFP General Secretary recalled being warned once by a high ranking Finance Ministry official that he (Srisena) should not be commenting about the high cost of building highways and roads, if he wished to remain in the government.

Srisena predicted that more ruling party members would defect to Opposition ranks in the coming weeks.

Leader of the UNP Ranil Wickremesinghe said that once Srisena was elected President, they would set about restoring the independence of public institutions and also weed out corruption starting from the top.

The extent of corruption in the last nine years was mind-boggling and never witnessesed in the history of this country, he noted adding that it had been one of the main reasons for the drawbacks in the economy and the skyrocketing cost of living.

Democratic party leader and former Army Commander General (Rtd) Sarath Fonseka said that the “Father” was ranked the ninth richest person in Asia while the “Son” 14th. “It is these people who are sermonizing to the common masses who are struggling to find three square meals a day.”

He said January 8 would mark the end of the Rajapaksas who had wreaked havoc in the country driving fear and insecurity in the minds of the people when it should have been the opposite with the end of the war which he had led from the front and not from air conditioned offices.

Former President Chandrika Kumaratunga said that the monthly Food Bill at Temple Trees was around Rs. 25 million with an additional Rs.500,000 spent on fruits.

Corrupt government MPs had been given Rs.250 million each to spend as they wished, while the honest ones had been blacklisted and harassed. The Rajapaksa regime, she said, encouraged corruption so that it could have hold on its members.

“The government has accused us of being traitors and planning to hand over the country to the LTTE within 100 days. The traitors are all in the government and not among us. Karuna Amman, who massacred a large number of innocent civilians, has not only been made a Minister but a Vice President of the SLFP and the LTTE’s former Chief arms procurer Kumaran Pathmanathan is being given VVIP treatment and protection,” Kumaratunga said.

Home » Maithripala will not step into President’s House ‘after victory’