Media using me to increase sales-Mervyn 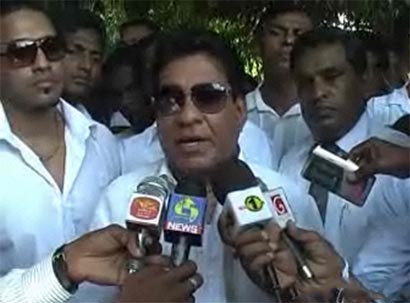 Public Relations Minister Mervyn Silva today said that if the media wants to use his name to increase their sales by spreading rumours about him, then so be it.

“I heard that the SLFP Central Committee is going to take a decision against me. However, I have not yet been formally informed about it. The media is giving publicity to the rumors to increase their sales. If they could sell Mevyn Silva, so be it. As a man from the south I will fight against any move to betray the country. If I threatened to break limbs I must say that breaking limbs was a lesser punishment when compared to those that existed during the time of ancient kings,” he said.

During his visit to the Kelaniya temple to attend religious observances, he told the media that the ancient Kings did not have mercy on the traitors who betrayed the country.

“I will not allow the individuals who depend on dollars of the foreigners and do their dirty work to ruin the Sinhala community. President Mahinda Rajapakse saved the country from terrorism through a humanitarian operation when many other government’s succumbed to the pressure of terrorist movements and granted their demands,” he further said.

3 Responses to Media using me to increase sales-Mervyn