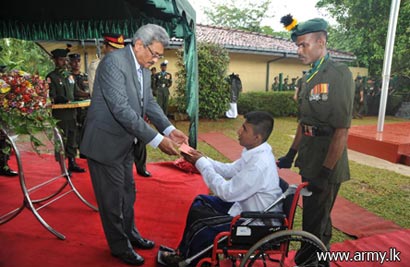 Secretary Defence Mr Gotabaya Rajapaksa at the invitation of the Commander of the Army, Lieutenant General Jagath Jayasuriya took time off on Saturday (27) and attended a series of commemorative ceremonies, organized by the Sri Lanka Sinha Regiment (SLSR) at its Ambepussa Headquarters.

Mr Gotabaya Rajapaksa as Chief Guest for the occasion received the salute of the Guard of Honour accorded in his honour by SLSR soldiers soon after he was welcomed by Colonel of the SLSR Regiment Major General D.R.A.B Jayatillake. Mr Rajapaksa afterwards planted a tree sapling around the parade square as a token of memory before joining the flag hoisting to signal the commencement of the day’s proceedings.

After a brief welcome, Mr Rajapaksa addressed the gathering of spouses, next of kin, children of fallen and missing War Heroes, disable War Heroes, serving officers and other ranks and all other invitees to the day’s proceedings. Soon after the address, the visiting Secretary Defence distributed gifts parcels among families of fallen War Heroes.

The main ceremony got off with the symbolic lighting of the eternal lamp at the foot of the SLSR War Hero monument in the Ambepussa SLSR Headquarters compound. The visiting Chief Guest laid a floral wreath and paid his respect to the memory of fallen SLSR War Heroes. Others including Commander of the Army and close relatives followed suit and recalled the memories of those fallen War Heroes after making floral offerings as next of kin lined up together to unfold SLSR flags in honour of them to the sounding of the last post.

The next leg of the ceremony at the SLSR museum saw SLSR disable War Heroes receive special gift parcels from the Chief Guest. It was a moving scene as those War Heroes respectfully acknowledged the receipt from the visiting Mr Rajapaksa.

Minutes after, the Chief Guest opened the newly constructed accommodation building for other ranks amidst Seth Pirith chanting and milk pot boiling ritual.

In the afternoon, religious services representing Catholic, Hindu and Islamic faiths got underway at separate sacred places in Warakapola and Keenadeniya where SLSR families of those denominations joined together to commemorate their fallen beloved ones.

Towards the later part of the day, an all night Pirith chanting ceremony got underway at the SLSR Headquarters after Buddhist monks were conducted in a colourful Perehara (procession).