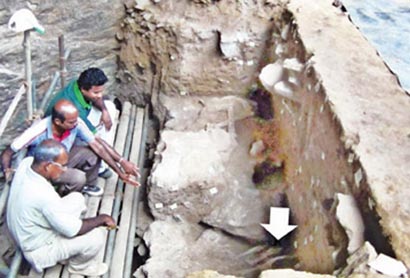 Excavations at the Pahiyangala cave in Bulathsinhala, Kalutara confirmed that homo sapiens had settled in Sri Lanka 40,000 years ago, Deputy Director of Archaeology Dr Nimal Perera said. A skeleton of the Balangoda man was found at the excavation site of the Pahiyangala cave a few days ago, he said. It was the first time that a pre-historic human skeleton was unearthed in Sri Lanka, Dr Perera said. Following the excavation, more evidence was found about the Balangoda man including his food items, rituals and also equipment made out of stone used by him, he said.

Some ornaments made of beads were also excavated by archaeologists. Other finds include weapons made of animal bone, Dr Perera said.

Excavations of the Pahiyangala cave started in 1986. Dr W H Wijepala, a former Director General of Archeology conducted excavations under the guidance of Dr S U Deraniyagala.

From these excavations, remains belonging to 12 individuals that resembled the Balangoda man were found.