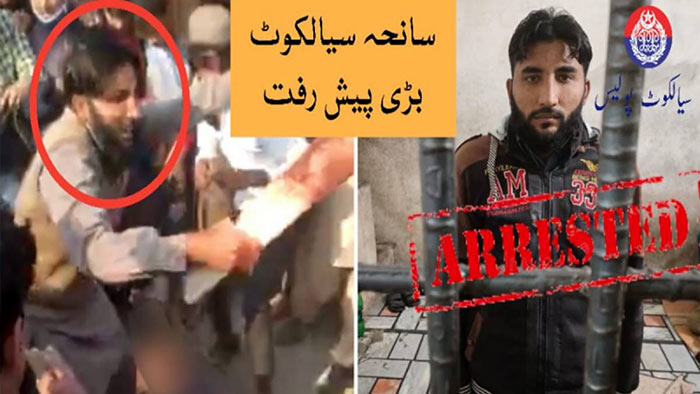 “Police have arrested the most wanted accused Imtiaz alias Billi, who was involved in the gruesome murder of a Sri Lankan citizen and desecrating his body,” the Punjab Police announced on its official Twitter handle.

The fugitive who had been constantly escaping police raids was finally arrested from a Rawalpindi-bound bus, it added.

The arrest takes the number of apprehended prime suspects in the case to 27, including the one who plotted to assassinate the Sri Lankan manager, increasing the total number of in-custody suspects to 132.

“Punjab Chief Minister Usman Bazdar and the Punjab IG are constantly monitoring the investigation of the case. The CM has assigned the task of prosecuting the case to the prosecution secretary,” the police statement added.

The police on Sunday also arrested Adnan Iftikhar, one of the main instigators of the attack.

An FIR has been registered against 900 unidentified persons under many sections of the law, including the Anti-Terrorism Act.

On Monday, the human remains of the victim of the Sialkot incident were repatriated to Sri Lanka with official honours.

The body was received by his next-of-kin at the Bandaranaike International Airport (BIA). The foreign ministries of both countries coordinated the matter.

“We share the grief of the Sri Lankan government, its people and the bereaved family over the assassination of Priyantha Kumara,” the official hand of the provincial government quoted Chief Minister Usman Buzdar as saying.

“We assure the nation that the Punjab Government is fulfilling all its responsibilities in this regard. So far 132 people have been arrested including 27 main accused,” it added.