Ms. Ekneligoda declines to reveal outcome of meeting with UN 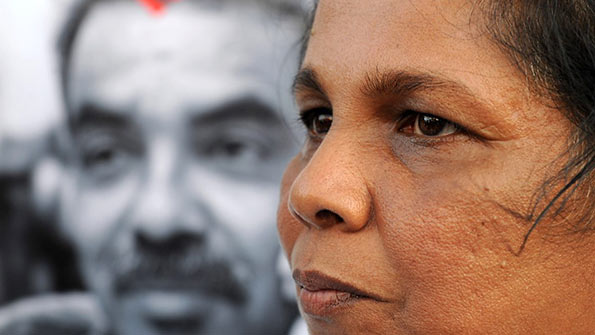 Missing journalist Prageeth Eknaligoda’s wife Sandya on Tuesday declined to reveal the outcome of the meeting with the United Nations Working Group on Enforced or Involuntary Disappearances saying that the UN official asked her not to reveal anything to the media.

Ms. Eknaligoda said the UN official asked her not to reveal anything to the media because there would be a public event about that.

“The UN officials do not like me to reveal what was discussed or happened today. They said that they wanted to safeguard the visiting team. What we did was to tell them our grievances. They have got an opportunity to visit Sri Lanka since 1999. We should help them to carry out their duties,” she said.

Ms. Eknaligoda said if she revealed the outcome of the meeting, she would find it difficult to work with them.

She said she had few issues with regard to her husband’s case including that of private lawyers representing the army even though the Attorney General claimed that the army did not disturb the case.

3 Responses to Ms. Ekneligoda declines to reveal outcome of meeting with UN