Multiple Paris terror attacks leave as many as 120 dead 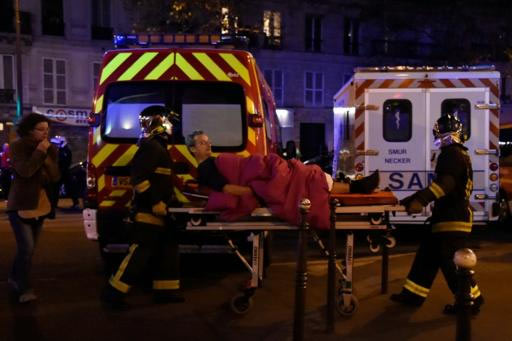 The death toll in attacks across six sites in Paris could exceed 120, Paris Prosecutor Francois Molins said on French television early Saturday. He said at least five assailants have been killed.

At least 100 people were killed at the Bataclan theater in Paris’ 11th arrondissement, where scores of hostages had been held. Police in Paris told NBC News that several people had also been shot at a restaurant in the nearby 10th arrondissement in Paris.

French President François Hollande ordered a state of emergency in Paris and closed the country’s borders after the violence broke out.

A police union official told the AP that there were two suicide attacks and a bombing near the Stade de France, north of Paris. At least three people were killed near the stadium, Gregory Goupil of the Alliance Police Nationale told the AP.

“Terrorist attacks of an unprecedented magnitude are in play in Paris. It’s horror,” Hollande said.

“I’ve asked for military reinforcements to make sure that no other attack can happen,” Hollande said.

“For all those who’ve seen these atrocities, rest assured — we want to say that we will bring the fight against terrorism and will be without pity because when terrorists are capable of such atrocities, it will certainly be faced with a determined France, a united France.” he said from the site of the carnage.

Hollande would stay in Paris and wouldn’t attend the G20 summit in Turkey, according to the French government. An additional 1,500 soldiers had been mobilized, the government said.

Police in Paris urged people in the city to stay inside.

Officers were being dispatched to sites around the 10th arrondissement, which is about five miles from the Stade de France, police told NBC News. It was unclear if the incidents were related.

A Europe 1 journalist who was in the concert hall said there were two or three unmasked attackers with automatic weapons. He said they “began to fire blindly in the crowd,” and the attack lasted at least 10 minutes.

“Everybody ran to the stage, there were scenes of stampeding,” he said. “The assailants had time to reload at least three times.”

Alexandre Bims, 18, was entering Stade de France when he heard an explosion. “We thought it was a gas leak, but then we saw people on the floor that were not moving,” Bims told NBC News. “The police officers did not know what to do, they were choked and dizzy,” he said.

“There was a second explosion, we saw someone who lost an arm,” Bims said, adding that after the second blast, he started running.

“After five minutes, we heard a third explosion,” he said.

“We’re going to do whatever it takes to work with the French people and with nations around the world to bring these terrorists to justice,” Obama said, adding that he did not want to speculate about who was responsible for the attacks.

In August, a gunman armed with an AK-47 opened fire on an Amsterdam-to-Paris train in France before being subdued by passengers, including three Americans. Three people were injured.

Global security firm Flashpoint Intelligence said that it had not seen any claims of responsibility from any terror group in the immediate aftermath of Friday’s attacks.

Home » Multiple Paris terror attacks leave as many as 120 dead