MY HUSBAND WAS GIVEN A PRESENT FOR ENDING 30 YEARS OF WAR: MRS. FONSEKA 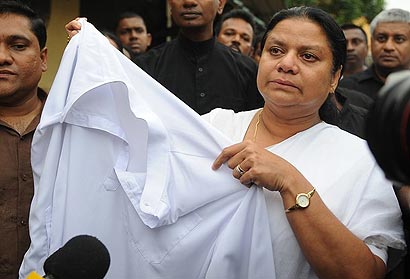 October 01, 2010: “I think he was given a present for ending 30 years of terrorism. I cannot imagine with what kind of a frame of mind that this was done. We hope for at least some relief from the courts as we have faith in the judiciary.

“My husband and myself always said that we have not done anything wrong to ask for forgiveness. If we are told what kind of appeal it should be, then we will consider it.”

Anoma Fonseka, wife of former Army Commander Sarath Fonseka made this statement after visiting her husband in Welikada prison this evening.

Several members of the Democratic National Alliance (DNA) visited the Welikada prison this evening, but it was only Mrs. Fonseka and her sister who were allowed to go into the prison and meet former Army Commander Sarath Fonseka.

12 Responses to MY HUSBAND WAS GIVEN A PRESENT FOR ENDING 30 YEARS OF WAR: MRS. FONSEKA

Home » MY HUSBAND WAS GIVEN A PRESENT FOR ENDING 30 YEARS OF WAR: MRS. FONSEKA