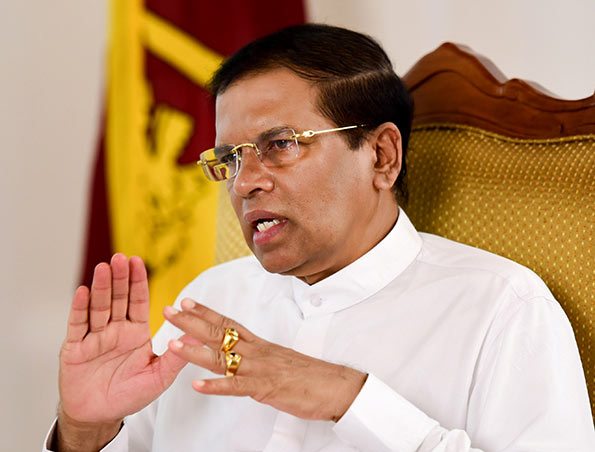 President Maithripala Sirisena said the top most priority of the government is to create legal, constitutional and political conditions in Sri Lanka to ensure that corrupt, rotten, autocratic regimes will not come to power in the future. Such undemocratic regimes of family nepotism was a curse on the nation and the way the state resources and finances were swindled is unthinkable, he said.

The President said that the government enacted the 19th Amendment to the Constitution exactly a year ago on April 27, 2015 to establish the Constitutional Council and eight other independent councils to strengthen democratic practices in the country. He said he was determined to continue these steps to ensure a healthy political culture in Sri Lanka.

Addressing the heads of media institutions at the President’s House in Colombo yesterday (April 27), President Sirisena said that although some people with vested interests were talking about forming a new government soon, there is not even a semblance of a chance for a government change as none of the parties represented in the Parliament could get the majority support. “It is a pipe dream,” he said and added that those who make such announcements do so with the intention of creating fear among the bureaucrats and law enforcement officials who are investigating into bribery, corruption and other misdeeds.

The President said while it is necessary to punish the corrupt, what is more important is to create conducive socio-political conditions as well as legal and constitutional provisions to ensure that such corruption and malpractices would not take place in the future.

Recalling the reasons for leaving the government in November 2014 to be the common candidate at the Presidential Election, he said that the way corruption, family rule, misdeeds and abuse of public property had spread, he thought that he would be committing a major sin against the nation and the people if he had remained a partner in that government. “Although I had only 40 days to campaign, over 6.2 million people voted for me because they looked upon us to form an exemplary democratic, righteous government. Because the people held very high hopes of an exemplary government, they expected quick results. But we have inherited a very rough, broken, dilapidated pathway and, our progress became slow. However, we are courageously forging ahead and our determination to fulfill the promises given to the people remain unchanged,” he said.

Answering questions, the President said that the government is fully committed to media freedom. He urged the media to act freely and impartially and stand on issues in the interest of the nation. He said that there were complaints by two electronic media institutions that another media outlet has abused the guidelines and regulations listed in the licenses issued by the Telecommunication RegulatoryCommission and it was necessary to bring these concerns to the notice of the errant party. The TRC will have to ensure that the guidelines and regulations are adhered to, he said.

The President said that he had asked British Prime Minister David Cameron when he met him at the CHOGM in Malta to help us to get the fish import ban lifted and restore GSP Plus concession. “I am glad that we managed to get the ban on fish exports to EU lifted and I have received some positive indications that the call for GSP Plus also be considered favourably”.

When a media correspondent asked about the resolution passed by the Northern Provincial Council calling for a federal solution, the President said anybody could pass any resolution, but the government will never allow Sri Lanka to be divided or bifurcated or allow any harm to the sovereignty and territorial integrity of the nation.