No tolerance of interference in SL’s affairs – President 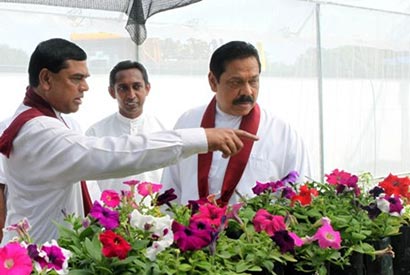 Sri Lanka, as an independent country would not give in to any arbitrary interference in its affairs. The government’s policy in respect of all matters will continue to be guided by the vital interests and well being of the people, President Mahinda Rajapaksa asserted yesterday.

Referring to the resolution on Sri Lanka adopted by the United Nations Human Rights Council, he said that Sri Lanka’s narrow defeat in Geneva would please the LTTE proxies and the diaspora but not the people of Sri Lanka.

The President also appreciated the stand taken by the 15 countries that voted with Sri Lanka and the eight countries which by abstaining declined to support it (23 out of 47), despite the intensity of pressure, in a variety of forms, exerted on them all. President Rajapaksa addressing the large gathering at a main ceremony held at Wevita Maithri Vidyalaya premises, Bandaragama also noted that what Sri Lankans sought from his government when it came to power in 2005 was the establishment of freedom and honourable peace.

He pointed out that the government had done that and more in a very short span without succumbing to pressure or influences.

“As a result,” he said “the country today was on the path to rapid economic development while ensuring freedom and dignity of all people without discrimination.”

He stressed that whatever obstacles faced, the government was determined to carry forward and consolidate on the hard earned gains of establishing peace, stability and propagating development which were achieved after 30 years of instability and violence. The main ceremony at the launch of the Eka Gamakata Eka Wedak – development projects for all villages programme- was held at Bandaragama. The programme was simultaneously launched in all Grama Seva divisions (over 14,000) in the country yesterday.

Accordingly, development projects will be carried out in all villages for the benefit of people with Rs. one million allocated for each project.

The President also pointed out that development was wholesome and was not confined to any single sector or area and also spiritual and morale habits of the people too were improving since the end of violence.

However, he pointed out that some elements were blind to this impressive progress in all sectors as their eyes were clouded by jealousy, hatred and petty interest.

The President said that certain elements that never went to the north were going there after a resolution came up against the country in Geneva and were preaching that the government has not done anything in the area.

“To whom are they trying to send this message and for whose benefit are they working at such a crucial time for the country? the President questioned.

The President also pointed out that the present government had always dedicated itself to ensuring democracy, promotion and protection of human rights, guaranteeing equality, dignity, justice and respect for all.

“In ensuring promotion and protection of human rights the country always has looked to the values it has nurtured in its proud 2,500 year history and religious teachings of all faiths, he added.

“However, when some country’s are trying to stand on their own feet, there are some elements with vested interests who try to bring them down, using various issues”, he added.

President Rajapaksa pointed out that despite the malicious agendas of these elements, the ordinary masses were speaking with one voice on behalf of the country.

He said that Sri Lanka would continue to seek domestic remedies for its issues. “Whatever the challenges we would not allow the ugly head of terrorism to re-surface. We would consolidate and achieve further progress in our quest towards achieving development, peace and prosperity, he added.

He urged the people to rally round the government to build the country without falling victim to malicious propaganda. On the development initiative launched yesterday he said that this was a historic one which would further consolidate the ongoing development at village level. He also said that many such projects which will benefit the people are in the pipeline.

The new initiative launched yesterday is another project under the national development programme “Gama Neguma” which is being conducted under the purview of Economic Development Minister Basil Rajapaksa.

The Wevita Lake in Bandaragama is to be renovated under the ‘Eka Gamakata Eka Wedak’ programme. During yesterday’s ceremony the President also commissioned the Wevita Maithri Vidyalaya as a secondary school. Many other development initiatives too were opened in the area to coincide with the occasion.

Home » No tolerance of interference in SL’s affairs – President