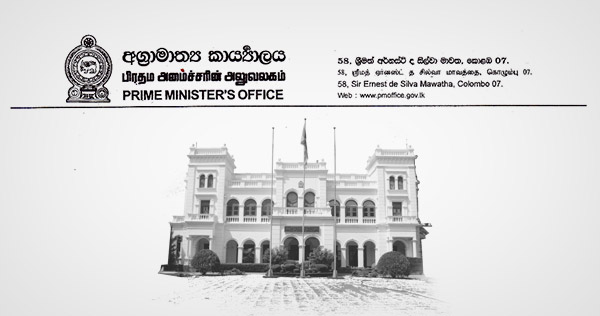 The Office of the Prime Minister has dismissed allegations made by General Secretary of the Sri Lanka Freedom Party Parliamentarian Dayasiri Jayasekara claiming the Land Reforms Draft Bill which is due to be taken up for debate in Parliament was gazetted without the approval of the Cabinet of Ministers, as entirely false and misleading.

Issuing a statement the Premiers office also dismissed charges levelled by MP Jayasekara claiming the relevant draft bill was gazetted without several amendments proposed by the President when it was presented to the Cabinet of Ministers, as false.

The Land Reforms Draft Bill was due to be included in the Act during the Parliament committee stage by the subject Minister once necessary amendments were made, the Attorney General was consulted and the draft Bill was approved by the Cabinet.

The Prime Minister’s office stated accordingly the President’s approval has been obtained.

Meanwhile the statement also dismissed as entirely false, claims that the draft Bill has been formulated in a manner in which land in the country can be provided to the US and international organisations under the Millennium Challenge Cooperation agreement which is due to be signed by the government.

The statement released by the Prime Minister’s office reiterated that no such proposals or clauses have been entered into the MCC which allow land to be handed over or sold to foreigners.