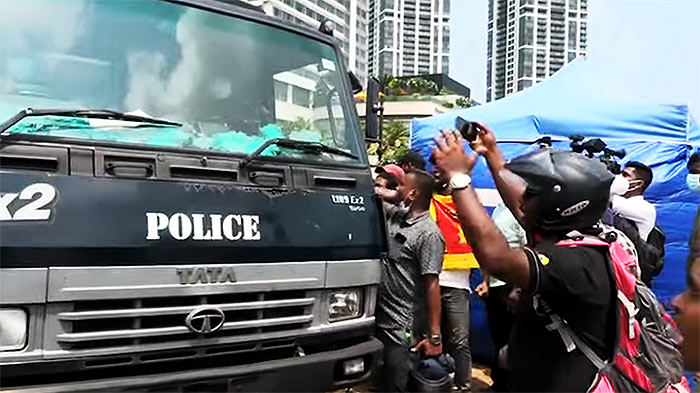 A tense situation erupted at the Galle Face protest site today (May 02) morning when police officers attempted to move in and remove a structure that was being set up at the protest site opposite the President’s Office.

Protestors angered by the police attempt decided to obstruct the path of a police truck, and eventually force the truck to reverse back and leave.

“As long as the protests are peaceful we will not interfere. But they cannot block the entrance of any premises,” a senior police official said.

The protestors had informed the police that they were peacefully protesting for days and they should leave the premises without causing any hindrance.

The riot police eventually withdrew all their police from the area.

As the country faces an economic crisis, Sri Lankans are exercising their freedom of speech and assembly to a degree unprecedented in the country’s history, and have been protesting for over three weeks outside the most powerful building in Colombo, the President’s Office.

Protesters accuse the present government of corruption, nepotism, and authoritarianism, while leading the country into an economic abyss.

The main reason for the protests is the country’s dire economic crisis, the worst since Independence.