POLITICS SHOULD NOT BE CONFRONTATIONAL, BUT PARTICIPATORY 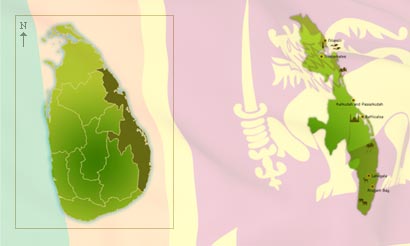 The victory of the UPFA in the recent Eastern Provincial Council elections has to be given serious thought by the Muslim community. Though the UPFA has got 204000 votes and captured 14 seats, this does not mean that the UPFA is the governing body of the Eastern Provincial Council. If the UPFA had got at least 21 seats, then the situation will be different as the UPFA could have been sworn in to governance with their CM candidate. By doing so, they could have formed the EP Council political administration without any hassle. But the realities are different. In the beginning it was that the UPFA will also field candidates nominated by the SLMC a constituent party of the UPFA coalition in parliament. Due to certain demands put forward by the SLMC hierarchy, which were not agreeable to the UPFA and 2 other Muslim based political parties (break away groups of the SLMC) who are also constituent parties of the coalition government of the UPFA, at the very last moment, the SLMC decided to contest the Eastern Provincial Elections on its own. This is the political dilemma that had created a situation where the Muslims of the East are facing, viz-a-viz the support expected by the government to form the new UPFA Eastern Province political administration. The ground cause for the SLMC to give in to the majority call of it’s “poraaligals”from the East were the issues which had been placed before the government by the General Secretary of the SLMC and nominated MP Hassali of Ninthavur. These are many issues that come under the purview of the 13th., amendment and made law by the central government. SLMC parliamentarian Hassanali echoed the sentiments/grievances of the Eastern Muslim voters. The Muslims who comprise 8% of the population have been a sidelined community in the political annals of Sri Lanka , until 1981 and then in 1986 when the SLMC entered the national political arena of Sri Lanka . Since 1946, the elite of the Muslim community in Colombo benefited the best until a change happened in the early 1960 tees with the late Hon. Badiuddin Mahmud becoming the Minister of Education, under the late Hon. Sirimavo R.D.Bandaranaike as the PM then.

The advent of the late M.H.M. Ashraff, an SLFP’er himself then, later created the SLMC in 1981. On 11th September 1981 the Sri Lanka Muslim Congress was established at Kathankudy in the Batticaloa district under the Chairmanship of Marhoom A. L. Ahmed. Marhoom M H M Ashraff was elected its Founder President. This Party was formed by a small group of Eastern province political leaders. Marhoom Ashraff was a good motivator and the key mobilizer in organizing meetings, and questions and answer sessions with Muslim youth, where he began to get people to think seriously and question the Muslim leaders under the majority Sinhalese parties, then. He had the ability to inspire the younger generation of Muslims who were losing faith in the country. He aroused tremendous hope and optimism by talking little things to people. In November 1986 the Sri Lanka Muslim Congress was formally inaugurated as a political party at the “badsha” festival held in Colombo with Marhoom Ashraff, as its Leader. The late M.H.M. Ashraff had a vision for his people in doing so.

It is well known that the East has vast natural resources like ilmenite (used for nuclear energy), silicon dioxide (used for making glass), sea weeds (for use in pharmaceutical products),  fishery resources and the development of tourism and wind energy for electricity generation, which are a few to name. A comprehensive plan to develop and exploit these resources would be of great political and socio-economic stability to the government and to the upliftment of the Eastern province population who had been pushed to extreme poverty since independence. The Chinese and the Indians are already engaged in these activities at planning stages. But how much of this is at disposal in the form of socio-economic benefits to the “poraalikals”? What about the Tourist industry too, but the Muslims for religious adherence, shelve this industry other than the trading of the goods sector only. Added to this, has been the culture and tradition of the dominating attitude of the Northern Tamils, who considered the Muslims and Eastern Tamils as second class citizens, a norm that was seen by the infiltration and dominance of all public service positions and the control of the business and private sector segment of the East by Northern Tamils. A very good challenging example of this will be seem if a research study of all the funds allocated by the central government for the development of the education/schooling sector of the Trincomalee district during the last 23 years will be undertaken by the new EPC political administration, once put in place. The research study will show an indication of the extreme levels of administrative manipulations and official “due process” administered by the Northern Tamil  bureaucrats against the Muslim school children, Muslim teachers and educational teacher and minor employment staff. The Eastern Muslims were very much battered by this unethical practice of the Northerners. This is NOT an alligation against the Tamil community of the East or the Trincomalee district, but the TRUTH cannot be swept under the carpet at this crucial moment of the history of the Eastern Province that will be opening under the possibilities of an SLMC-UPFA Eastern Provinve Council Political Administration.

This was also a reason for Karuna Amman to break away in March 2004 from Prabaharan and to help the government forces to clear the East from the LTTE presence. The government as a result of the demerger, called for an Eastern Provincial Council election which took place on May 10, 2008 to elect members to the Council, even at the peak of the war against the LTTE. At this election, the Eastern Muslims got their majority. 18 of the 35 elected councilors were Muslims. Of these eight were in government ranks. Only ten of the elected councilors were Tamils. Of these only six were from the TMVP. But the biggest loss was for the Muslims when they lost “lock stock and barrel’ the possibility of having a Muslims Chief Minister of the Eastern Provincial Council. Was this due to petty selfish regional politics or political selfishness and greed for positions by neglecting the overall benefits to the Muslims in the East or due to the failure of political “CUEMANSHIP” by a certain Muslim political leader, is well explained today. Today, this situation has changed for good. The Muslims in the East did not oppose HE. Mahimda Rajapaksa. They opposed some of the detrimental administrative policies of the Mahinda Rajapaksa government. The general Secretary of the SLMC and the Leader of the SLMC have gone on record stating this to the media in the run-up to the EPC elections. Therefore “POLITICS SHOULD NOT BE CONFRONTATIONAL, BUT PARTICIPATORY”.

MUSLIMS IN THE EAST HAVE THEIR ISSUES TO SETTLE and this they have to talk it over with an open mind and heart with HE. Mahinda Rajapaksa when deliberating the tie-up to the formation of a coalition of the SLMC and the UPFA to form the new EPC political Administration. Nevertheless, the SLMC should be very happy that the President has engaged a very able and trustworthy young politician with innovative vision to be the FACILITATOR and MEDIATOR between the two parties. Though young to politics, but well known as a “doer”, Parliamentarian Sajin Vass Gunawardena can be trusted as a person who is well informed, read and balanced in his thinking of the ethnic and soci-economic issues of all Sri Lankans, especially being involved in the internal issues of this area and the challenges in the international forum. The only thing that the SLMC has at this point to use as a weapon in support of their requests is to just:

The SLMC should make sure that in the future they will not be blamed as they have failed as in 2008 to have missed the rightful opportunity of getting a MUSLIM CHIEF MINISTER nominated to the Eastern Provincial Council of Sri Lanka. MUSLIMS IN THE EAST HAVE THEIR ISSUES TO SETTLE.  With the balanced and trusted understanding of the “facilitator/mediator, parliamentarianSajin Vass Gunawardena in place, the SLMC is in the “Right place at the Right time, with the Right people”. The SLMC cannot fail this time. May God AllMighty Allah bless them with patience, and understanding to form the EPC political Administration with the UPFA. If they will do so, we all as Sri Lankans and especially Muslims of the Eastern Province, will be at peace, Insha Allah.

2 Responses to POLITICS SHOULD NOT BE CONFRONTATIONAL, BUT PARTICIPATORY

Home » POLITICS SHOULD NOT BE CONFRONTATIONAL, BUT PARTICIPATORY