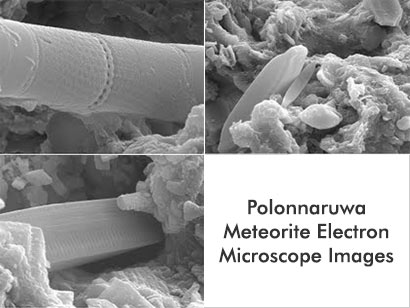 A meteorite that Landed recently, close to the ancient city of Polonnaruwa in Sri Lanka has been described as the most important scientific discovery in the last 500 years as it carried “compelling evidence of life” from outer space.

The scientists who discovered the contents of the meteorite said, “we report here the first compelling evidence for life existing outside the earth.’

Following extensive lab work in the United Kingdom and Sri Lanka  four scientists in a paper said , “We report the discovery for the first time of fossilized diatoms  in a carbonaceous meteorite that fell on 29 December 2012”.  Diatoms are a variety of algae.

They very firmly said contamination, a hazard scientists face when examining things fallen from the sky on the ground is excluded in the meteorite they have named Polonnaruwa.

The four scientists,  Chandra Wickramasinghe, J. Wallis, D.H.Wallis, and Anil Samaranayaka said, there are also structures in the meteorite similar to the red rain cells that fell within days in the area.

The team in a paper to be published in the Journal of Cosmology added, “The new data on fossil diatom provide strong evidence to support the theory of Cometary Panspermia” -a theory that says life came to our planet earth and other worlds hitchhiking on comets from far corners of the universe.

The leader of the team, Professor Chandra Wickramasinghe from the Buckingham Center for Astrobiology in UK told this correspondent, “”I think the discovery of an unequivocal microbial structure such as a diatom deeply trapped in the rock matrix proves beyond doubt that this life existed in the parent comet from which the meteorite was derived. The highly intricate and woven patterns on the outer shells of diatoms are impossible to generate by any other process than biology. This could ultimately turn out to be the most important scientific discovery in 500 years. The cosmic ancestry of humans becomes ever more securely established.”

“People might try to say that what we found were terrestrial contaminants. Contamination after landing on Earth is ruled out absolutely because of the way the diatoms are woven between the rock matrix. In any case we found many diatom types that are not known to be present on the soil where the meteorite landed.”

The scientists said minutes after a large fire ball seen by a large number of people in Sri Lanka on 29 December 2012 a large meteorite disintegrated and fell in the village of Araganwila located few miles away from the historic city of Polonnaruwa.

At the time of entry into the earth’s atmosphere on 29 December 2012 the parent body of the Polonnaruwa meteorite would have had most of its interior porous volume filled with water , volatile organics and possibly viable living cells.  The scientists said  a remarkable coincidence was the red rain.

They said the red rain analyzed at the Medical Research Insitute in Colombo contained red biological cells that show spontaneous movement and the ability of reproducing. Abnormally high in arsenic and silver they are connected to a non territorial habitat , possibly connected with a cometary asteroidal body. The four scientists said the Polonnaruwa meteorite was a result of a fragmentation of such a body.

The electron microscopic studies of the Polonnaruwa meteorite had been done at the School of Earth Sciences of the Cardiff University, in the United Kingdom.

The scientists said contamination is decisively ruled out in the meteorite since the structure is deemed to be fossilized  and fossil diatoms were not present on the surface of the ground where it fell.The scientists said ,  contamination is excluded by the circumstance that the elemental abundances within the structures match closely with those of the surrounding matrix. There is also evidence of structures morphologically similar to red rain cells that may have contributed to the episode of red rain that followed within days of the meteorite fall.  They said , “We conclude therefore identification of the fossilized diatom of  the Polonnaruwa meteorite is firmly established and unimpeachable.”

They also said,” Since this meteorite is considered to be an extinct cometary fragment , the idea of microbial life carried within comets and the theory of cometary panspermia is vindicated.”

The paper said , “The universe , not humans must have the final say to declare what the world is really like.”