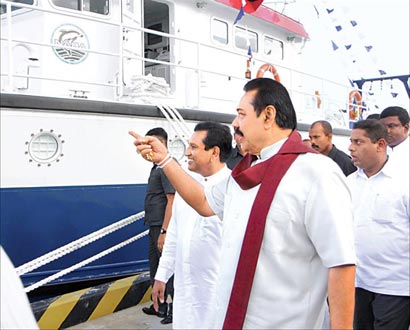 President Mahinda Rajapaksa launched the Samudrika Research Vessel (Samudrika RV) of the National Aquatic Resources Research and Development Agency (NARA) at the Magampura Mahinda Rajapaksa International Port yesterday. This vessel, specially designed for maritime research, is 25 metres in length and 6.5 metres in width and can accommodate seven researchers at any given time.

Samurdrika, the first research vessel of the country cost Rs 300 million. The ship has the most modern equipment and a laboratory to collect maritime data around the country. Samudrika is capable of conducting a wide range of ocean-based research, hydrographic and oceanographic surveys in the maritime environment.

The launch of this ship will give greater impetus to achieve the government’s quest of becoming a maritime hub of Asia.

The President also inspected the port premises after launching the ship.

He also inspected the construction of the passenger terminal, runaway and signal tower of the airport.

The government is to spend over US$ 200 million for the project.

The airport project spanning over 2,000 hectares is funded by the Chinese government under concessionary loan facility.

The first phase of the project includes the construction in an area spanning over 800 hectares and it is the second international airport of the country. He also inspected the construction of the Expressway from Hambantota to Mattala Airport.