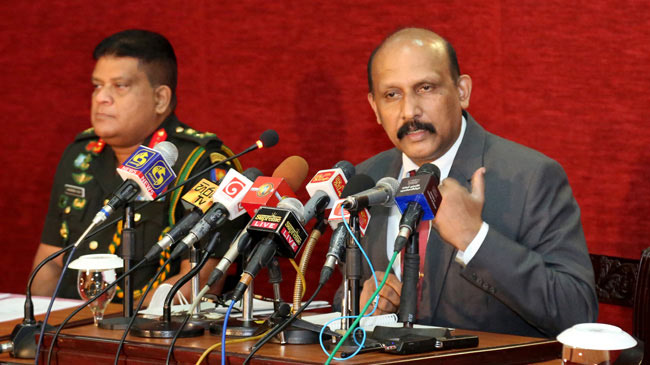 Secretary to the Ministry of Defence, Major General (Rtd) Kamal Gunaratne revealed yesterday that not even one of the 79 CCTV cameras fixed at the Angunakolapelassa Prison that has been equipped with modern and sophisticated facilities, was functioning last week.

“When I first visited the Prison earlier this year only 26 out of the 79 CCTV cameras, were functioning. By last week none of those 79 was working. This is why we are sadly compelled to say that a considerable number of prison officials are corrupt when compared to other public institutions and we need strong people to manage prisons as all illegal activities and gang mafia operations continue within prisons,” he said.

Asked whether the Special Task Force (STF) is engaged in search operations inside the prisons, Gunaratne said that the STF is not engaged in those operations.

“STF is deployed only in Boossa and Angunakolapelassa Prisons and that too only to protect outer peripheries. If wanted, the heads of prisons can get the STF engaged in such operations,” he noted.

He also said that even though the armed forces have apprehend a considerable quantity of illicit narcotics in the recent past, the prices of these illicit drugs have not decreased because major drug dealers in prisons are still active and engaged in major dealings, both locally and internationally.

While insisting that these drug lords are easily communicating with dealers both inside and outside the country, he said the Department of Prisons has the most corrupt officers in charge. He noted that these corrupt officers are the only reason that the Government has failed to eradicate illicit drugs.

He said at a Media briefing yesterday at the Defence Ministry that all the facilities to communicate with outsiders are given to imprisoned drug lords by corrupt officers who are in charge of prisoners.

“Each and every State institution has corrupt officers and we discovered that the corrupt staff in prisons are working according to the drug lords and not as the Ministry advises. It is a shame to note that people who should stop corruption are the ones who are initiating them,” he added.

After the recent search operations conducted in prisons, 61 mobile phones, 72 subscription identification module cards and 53 phone chargers which were being used by prisoners were taken into custody.

Meanwhile, Police Narcotics Bureau (PNB) Senior Deputy Inspector General of Police Sajeewa Medawatte said that due to travel restrictions and the curfew, the transportation of drugs was reduced and the prices remained static. “ The amount of pure heroin per gram of heroin seized, shows it is comparably low in comparison with the drugs that were apprehended during the curfew period,” he added. (GW)