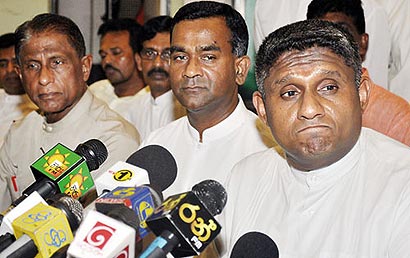 Sajith agrees to be deputy leader of party

The months long tussle in the UNP for leadership ended yesterday with Mr. Ranil Wickremesinghe retaining his position as the party leader, and Mr. Sajith Premadasa, who aspired to be the leader, finally agreeing to be deputy leader. Mr. Premadasa will also act as the deputy to the Leader of the Opposition in Parliament.

The party will amend its constitution to create two posts of deputy leader to be filled by Mr. Premadasa and Mr. Karu Jayasuriya. The UNP Working Committee (WC) met for three days consecutively to resolve the problem.

Daily Mirror learns that the party would decide on the powers to be vested in  Mr. Premadasa as deputy leader.

According to the UNP constitution, party’s five office bearers, including its leader should be appointed through a secret ballot unless there is consensus among the members.  Mr. Premadasa had vowed on several occasions to contest for the leadership along with Mr. Wickremesinghe.

At yesterday’s WC meeting, Mr. Wickremesinghe announced his candidacy for the leadership, and it was seconded by MP D.M. Swaminathan. At this point, Moneragala district MP Ranjith Madduma Bandara proposed the name of Mr. Premadasa for the candidacy, but no one seconded it.   Eventually, Mr. Premadasa rose on his feet, and said that he was prepared to accept the deputy leadership as proposed by some party seniors the previous day.

The WC approved the creation of a second deputy leader’s post to be offered to Mr. Premadasa. Party sources said that the affairs of the party’s youth wing, women’s wing and some grassroots level organizations would be placed under the purview of Mr. Premadasa.