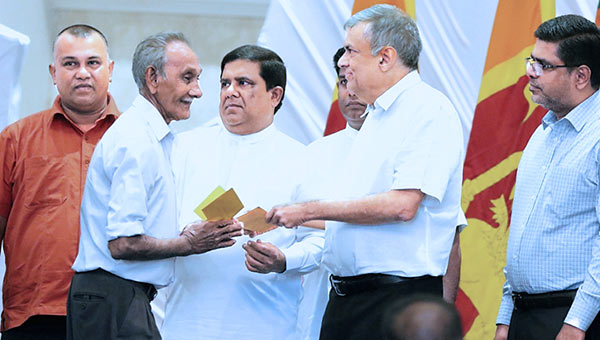 The Government has taken steps to grant Rs. 2,000 million as compensation to 17,000 families in the Kolonnawa DS division in the Colombo district affected by the 2016 floods to help uplift their lives. During the first phase of the programme, Rs. 271.6 million was distributed at Rs. 10,000 per family last year.

The distribution of compensation payments among 5,000 families as the second phase of the programme was held under the patronage of Prime Minister Ranil Wickremesinghe at Temple Trees on October 22.

This was an insurance cover for houses damaged by floods. Rs. 1,687 million will be distributed among 17,687 families under the 2nd phase.

Compensation payments were made to 5,000 families at the Temple Trees ceremony and beneficiaries qualifying for compensation above Rs. 80,000 received their payments.

The 2016 floods affected people in 40 gramaseva divisions in Kolonnawa DS division. Nearly 27,000 families were affected by the floods. This was the first time compensation was paid for rebuilding houses affected by floods.

The compensation was paid assisted by the National Insurance Trust Fund under the aegis of the Home Affairs Ministry. The balance families would receive compensation next week.

Speaking on the occasion, Prime Minister Ranil Wickremesinghe said the Government would pay compensation to people affected by such calamities according to its ability. He said compensation payments were made so far to 70,000 families affected by floods and landslides last year. Others would be paid after receiving the estimates. So far Rs. 3.36 billion was paid out in respect of 21 districts.

Rs. 1.3 billion had been paid to 30,000 families affected by landslides and floods in 2017. A total of 134,000 families had to receive compensation and instructions had been given to complete their compensation payments before the end of next month.