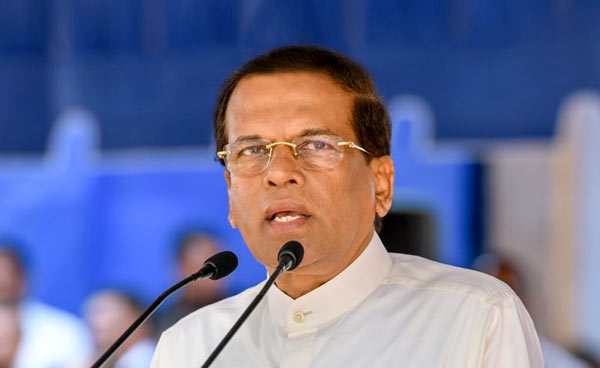 President Maithripala Sirisena says that the government has allocated Rs. 9000 million to provide dry ration to nearly 422,000 people who have been affected by the prevailing drought situation in several districts of the country.

The President made these remarks participating in the inaugural ceremony of the commencement of renovation works of the Nabadagasdigiliya tank in Mahawilachchiya, Anuradhapura under the Cascaded Tank-Village System to be implemented across the country, yesterday (21).

President Sirisena said that according to the latest reports Sri Lanka has been ranked in the 4th place among all the countries that are severely suffering from weather and climate changes. He also said that the government is fully committed to face this situation and to provide relief to the affected people.

Expressing his views on the drought relief programme, the President said that the then government in the year 2012 publishing many newspaper advertisements had given many promises to the people of the North Central Province when they faced the drought, however not a single relief was provided for them, the President added.

The President recalled that the present government has spent more than Rs. 15,000 million to provide reliefs to the people who were affected by the drought over the period of year 2016-2017.

The President pointed out that short term solutions as well as long term solutions are needed to face the climate change and the present government commenced the project to renovate tanks across the country in this regard.

The President commenting on the media report published stating that a married couple among the people who faced the drought prevailing in the Kahatagasdigiliya and Galenbindunuwewa area has eaten murunga (drumstick)leaves after suffering starvation, said that he has appointed an officer immediately to look into the issue.

17 tanks in Mahawilachchiya and Nochchiyagama Divisional Secretariat Divisions have been selected to renovate under the first phase of the Cascade Tank-Village System in Anuradhapura district. In parallel to this event many projects will be implemented to uplift the living standard of the people living in those areas.
The Cascade Tank-Village System is described as a connected series of tanks organized within a micro-catchment of the dry zone landscape, storing, conveying and utilizing water from an ephemeral rivulet. It is an ancient, widely used and unique traditional agriculture system mainly found in the dry zone of Sri Lanka. The system has evolved over a period of nearly two millennia. It provides water for irrigation, domestic purposes, animals and ecosystems.

The renovation works of the Nabadagasdigiliya tank in Mahawilachchiya commenced under the patronage of the President at the auspicious time in the morning.

The President also launched the cancer and kidney disease patients free transport programme by the Cyril Dharmawardena Foundation at the Anuradhapura hospital.

The Chairman of the Cyril Dharmawardena Foundation Binara Dharmawardhana and the Director of the Anuradhapura Teaching Hospital Dr. Dulan Samaraweera were present on this occasion.