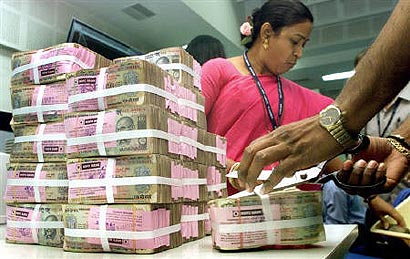 NEW DELHI:Even though not fully convertible, the Indian rupee will soon have a distinct identity. With a blend of the Devanagari ‘Ra’ and Roman ‘R’ as its unique symbol, the Indian currency will be joining the elite club of the US dollar, the European euro, the British pound sterling and the Japanese yen to mark its presence in the global arena.

Designed by Bombay IIT post-graduate D. Udaya Kumar, the symbol was approved by the Union Cabinet on Thursday to distinguish the currency of the over $ 1-trillion economy from the rest, such as the rupee or the rupiah of Pakistan, Nepal, Sri Lanka and Indonesia.

Information and Broadcasting Minister Ambika Soni said: “It’s a big statement on the Indian currency. The symbol would lend a distinctive character and identity to the currency and further highlight the strength and global face of the Indian economy.”

Unlike the pound sterling among the four currencies with distinct identities, the Indian currency symbol will not be printed or embossed on paper notes or coins.

It would be included in the ‘Unicode Standard’ and major scripts of the world so as to ensure that it is easily displayed and printed in the electronic and print media.

Ms. Soni pointed out that the symbol would be adopted within a span of six months in the country and in about 18-24 months globally.

Mr. Kumar’s winning entry was chosen from 3,000 designs received for the currency symbol competition. He will get an award of Rs. 2.5 lakh from the Finance Ministry. The jury, headed by an RBI Deputy Governor, had sent five short-listed entries for the Cabinet’s approval.