Sampanthan reveals who is future President 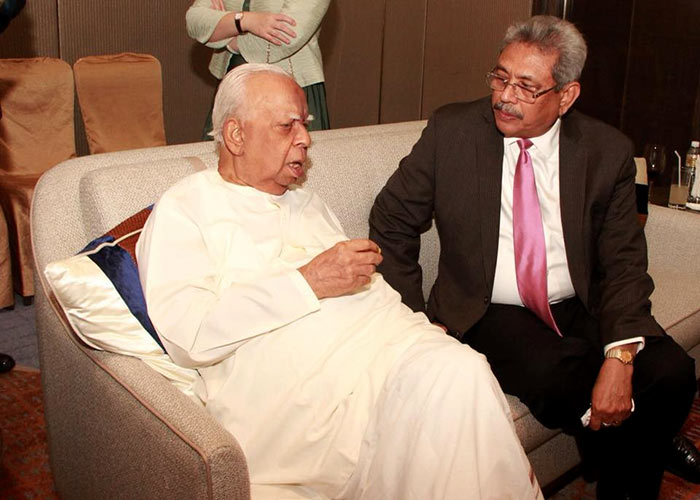 Senior Colonel Xu prior to raising the toast reviewed the glorious 91 years of the PLA, and highlighted PLA’s contribution to pursuing national independence, supporting national development and safeguarding world peace. He stressed that China adheres to an independent foreign policy of peace and development.

Under the guidance of Xi Jinping’s thought on diplomacy, the major-country diplomacy with Chinese Characteristics will uphold the banner of building a community with a shared future for mankind and help make the global governance system fair and more reasonable. China’s armed forces advocate a common, comprehensive, cooperative and sustainable security concept, and continue develop military to military relations that are non-aligned, non-confrontational and not directed against any third party.

Xu indicated in his speech that the friendship between China and Sri Lanka has withstood the test of time and grown even stronger.

“As a good and true friend, over the past decades, China has provided powerful support to the social-economic development and military and defence construction of Sri Lanka. The friendship between China has withstood the test of time and grew even stronger.

Chinese military attaches great importance to improving relations with Sri Lanka military. In the past few years, two militaries have witnessed the deepening communication and cooperation in the areas of personnel training, joint training, maritime security etc. This year, China will continue to provide various training courses for tri-forces, to complete building Chinese-funded auditorium complex at the Sri Lanka Military Academy, and make preparations to hand over a gift frigate to Sri Lanka Navy.

China is willing to enhance mutual strategic trust and is keen to see both countries continue supporting each other on issues for core interest. China wishes to boost the development of Belt and Road initiative to strengthen the pragmatic cooperation between two countries and two militaries,” he emphasized.

Defence Secretary Waidyaratne while appreciating China’s role in assisting Sri Lanka in many aspects said China has always been a valuable partner for Sri Lanka.

Leader of the Tamil National Alliance R. Sampanthan was having a cordial discussion with Chinese Ambassador when former President Mahinda Rajapaksa made his entry. Ambassador Xueyuan upon seeing Rajapaksa’s arrival rushed to welcome him and Sampanthan too had been by his side.

As the Ambassador was welcoming former Head of State, the TNA Leader- though not too sure whether it was a slip of a tongue – said this is our future President. Ambassador Xueyuan played along by saying “seems like…from what is happening at the moment.”

After Mahinda Rajapaksa, former Defence Secretary Gotabaya Rajapaksa too arrived and was seen having some serious discussions with Opposition Leader Sampanthan and his successor Waidyaratne.

Party Leaders who met last week under the patronage of Prime Minister Ranil Wickremesinghe have failed to reach a final agreement on whether the Provincial Council Elections should be held under the old or new electoral system, despite several rounds of meetings over the past few months.

However, reverting to the old electoral system had been discussed and party leaders except those representing the SLFP and JVP and the likes of Dinesh Gunawardena who fought for electoral reforms, had been in agreement with it.

As there was no final decision, the Party Leaders decided to meet again next Wednesday (1).

JVP Leader Anura Dissanayake said his party prefers the new electoral system sans preferential votes which was used in the recent LG Poll. MP Dissanayake had argued that reverting to the old system would mean a waste of all the deliberations and efforts made to introduce the new system.

The UNP Working Committee which met on Wednesday (25) had discussed extensively the possibility of holding the PC Elections under the old electoral system to avoid further delay.

The elections for the Eastern, North-Central and Sabaragamuwa PCs are already due, and the term of another three PCs namely the Central, Northern and North-Western is due to end by September. Party Leaders on 20 July agreed to schedule the PC elections on 5 January, 2019 if Parliament could arrive at an agreement on matters relating to the elections before November.

EC Chairman Mahinda Deshapriya said the Commission would play its part to hold elections, if Parliament could reach a decision soon. It was also learnt that outspoken Deshapriya had clearly pointed out that when considering their behaviour, none of the political parties seems interested in holding Provincial Council Elections anytime soon.

It was decided to appoint a review committee, with regard to holding Elections, chaired by Prime Minister Ranil Wickremesinghe. Opposition Leader R. Sampanthan, Minister Nimal Siripala De Silva, EC Chairman Mahinda Deshapriya and Chairman of the Delimitation Committee K. Thawalingam would be the other members.

Opposition Leader Sampanthan meanwhile at last week’s party leaders’ meeting had also sought whether there was a possibility to hold all PC elections at once. Many politicians later expressed concerns about this as they view this proposal as breathing oxygen to Government’s alleged attempt to delay PC polls further.
TNA leader earlier demanded that a new Constitution be enacted before the next Provincial Councils polls.

On behalf of the TNA, Leader Sampanthan sought India’s support for new Constitution when he met Indian Foreign Secretary Vijay Gokhale, at the Indian High Commission in Colombo, two weeks ago.

Briefing the Indian Foreign Secretary Sampanthan had pointed out that the new Constitution must be adopted before the Provincial Council Elections, the TNA said in a statement.

The TNA leader further stated that the chances of mustering a Two-thirds majority in Parliament is possible and, therefore, the new Constitution must be adopted before the end of the year, and we cannot simply afford to miss this opportunity, said Sampanthan.

At a time the process of making new Constitution running into new chaos with the dawn of every day, Sampanthan’s request, though may sound reasonable, could be described as highly impractical.

Aluthgamage further alleged that the said clause had been included in the new Constitution to prevent either former Defence Secretary Gotabaya Rajapaksa or anyone else with links to the Joint Opposition from contesting the next Presidential Poll.

This follows previous allegations by former Minister Dayasiri Jayasekara that the Expert Panel had been divided on its Report and that four out of its 10 members had not signed it.

“It is said that only MPs, Dr. Jayampathy Wickramaratne, M.A. Sumanthiran and Suren Fernando had been involved in drafting the Constitutional amendments. How can this happen when there are several members in the Committee? For the first time, a provision has been included to give powers to the Prime Minister, the Speaker and the Opposition Leader to remove the President, if all of them agree on it. We cannot support this type of Constitution”, Jayasekara said.

JO Parliamentary Group Leader, Dinesh Gunawardena said that there was no wonder that members of the Expert Panel had contradictory and clashing views on the content of the Report.

“A few individuals had compiled it and other members had been forced to sign it. The Prime Minister also accepted the views expressed by the experts that they are not being heard. Therefore, the Steering Committee asked the panel to re-produce the Report. This is a serious problem. MP Jayasekara said that a conspiracy had been hatched to remove the President. The Speaker should allow us to talk about this”, he said.

MP Sumanthiran rejected the allegation of forging a signature of a member of the Panel of Experts. He said six members of the Panel had submitted one document and two members a separate one. Two other members did not subscribe to either of the reports.

“There are no signatures on any of these documents. The experts agreed to those documents via email. The question of forging anyone’s signature does not arise at all,” he said.

He said the Steering Committee of the Constitutional Council had, at its last meeting, requested the entire panel to see if they could present one single document within two weeks’ time.

“The Steering Committee was also conscious that you can’t force experts to agree on anything. Chamindry Saparamadu, who was nominated to the panel by JO MP Dinesh Gunwardena, and Prof. Camena Gunaratne, who was suggested by me, had agreed on one document. We had no input in the documents submitted by the experts. I perused the document submitted by the six experts and found that there are many matters in that with which I don’t agree, but that I will take up at the deliberations of the Steering Committee. It is the Steering Committee that is tasked with the preparation of draft Constitution. Experts are there to advise. No underhand thing is going on here.”

The President had said that he will temporarily halt the 1,014 appointments set to be made under the scheme of providing placements for alleged victims of acts of political revenge.

He also entrusted Prime Minister Wickremesinghe to convey the message to Education Minister Akila Viraj Kariyawasam. Kariyawasam who was obviously disappointed with him being barred from proceeding further by President (as his programme to distribute tablet PCs to school children was also put-off by the President earlier) expressed his displeasure to Prime Minister.

PM Wickremesinghe who pointed out that he was merely doing the postman’s job with regard to the matter, also advised Kariyawasam that the exam times of school children are not the time for struggles to be launched.

However, by doing so, President Sirisena also seems to have provided UNP election campaign slogans to justify before public that they need to form a UNP Government in order to provide facilities to the people of the country as President blocks every move. Only future election would testify whether public would believe these arguments.