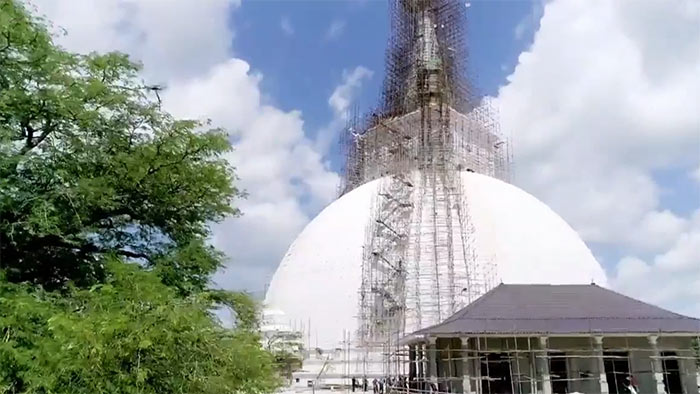 The Sandahiru Seya in Anuradhapura was ceremonially vested with the Venerable Maha Sanga today (November 18), officially opening the sacred site for devotees.

The unveiling of the Pagoda took place in a ceremony held under the patronage of President Gotabaya Rajapaksa and Prime Minister Mahinda Rajapaksa, dedicating the Sandahiru Seya to the Sambuddha Sasana for the worship of devotees all over the world.

It was built to commemorate the heroic war heroes who made great sacrifices for the unity of the motherland and to mark the end of the Thirty Years War.

The Venerable Maha Sanga and a number of distinguished invitees attended the ‘Crest Gem’ unveiling ceremony today, while families of deceased veteran war heroes and differently able ex-servicemen also arrived at the Stupa premises on the opening day ceremony to witness the blessed noble event.

The ‘Sandahiru Seya’ in Anuradhapura is the second biggest pagoda in the country while its ceremonial consecration to the ‘Sasana’ and the Maha Sangha was held today (18) in view of Ill Full Moon Day.

The pagoda’s structural completion was carried out with the support of hundreds of Army, Navy, Air Force, Police and Civil Security Department personnel of respective security establishments.

Erected to immortalize the memory of all War Heroes and civil staffers who laid their lives for defence of the country, the ‘Sandahiru Seya’ was unveiled and consecrated before leaving it formally in the custodianship of the members of the Maha Sangha.

The ‘Crest Gem’ had been placed at the tip of the Stupa pinnacle on November 08, amidst religious observances.