Sangakkara confident Sri lanka will lift themselves against England 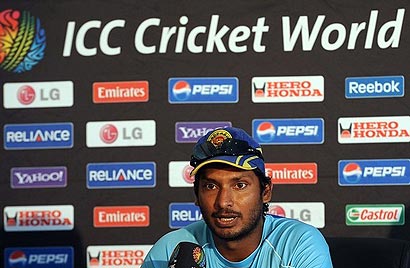 Now, thanks to the wonders of noise-cutting stump-microphone technology and video-sharing websites, the past refuses to stay where it should be.

At the 2003 World Cup in South Africa, Kumar Sangakkara, the thinking man’s sledger, ruthlessly picked away at the mental state of Shaun Pollock, the man burdened with delivering success to the host nation.

The episode is played out with glorious immediacy on YouTube. “There’s lots of pressure here for the skipper,” was Sangakkara’s greeting for Pollock, the South Africa captain, from behind the wicket. “Oh man, the weight of all these expectations, the hopes of a country, 42 million supporters, right here.”

Sangakkara was happy to talk the talk. Eight years on, it is he who will play Sri Lanka’s Atlas and shoulder his nation’s expectations in Colombo today.

If he is anything but cock of the walk against England, the 35,000 inside the R Premadasa Stadium and 21 million other Sri Lankans might be more than a little displeased.

“Both sides will be feeling that pressure equally,” Sangakkara, the Sri Lanka captain, said yesterday. “That is the way cricket is played here.

“Every single game you get a packed house in Khettarama. It won’t be any different [today].

“If you lose, you lose the chance of playing in a semi-final of a World Cup. The incentive to win is the same wherever you play.”

Since Sri Lanka last played here – the competition’s scheduling meant they had to make a curious jaunt to Mumbai to play their final group match against New Zealand – the temperature has risen appreciably.

The rainy season on Sri Lanka’s south-western coast is fast approaching, and the prevailing conditions are stifling. Humidity is “off the scale” in comparison to India, to borrow the assessment of Graeme Swann, the England spinner.

The atmosphere created by a packed house in a stadium built on swampland in the middle of a mass of low-income housing projects, is likely to be just as unrelenting.

This match was sold out months ago, even before the paying public knew Sri Lanka would be playing.

Given the build-up faced by an already jaded England side, they could be forgiven for feeling overwhelmed.

Adil Rashid, the leg-spinner who is replacing Mike Yardy in the squad, is not scheduled to arrive in Sri Lanka until this afternoon, following a 14,500km journey from the Caribbean.

Money and the carbon footprint are clearly of little concern to the powers that be in England. Rashid’s trip might be entirely futile if England fail to win.

Despite the comings and goings, Andrew Strauss, England’s captain, said his side remain confident.

“We have proved we stick together in close encounters,” he said. “The key, as is always the case, is to get your noses in front in the game and then pressure is a big man, especially at this stage of a World Cup.

“We are very excited about this challenge. I still think we are going out there with a very positive attitude.

“At this stage there is nothing to lose – we have to go out there and win games of cricket. That sort of mindset has served us very well in the past, and I am confident we can replicate that.”

Home » Sangakkara confident Sri lanka will lift themselves against England