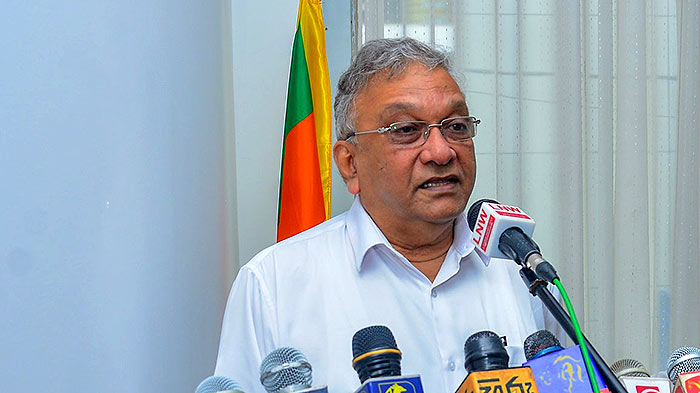 The SJB yesterday demanded that the government allow the Attorney General to prosecute all those against whom the Presidential Commission of inquiry on Easter Sunday carnage wanted criminal proceedings instituted.

Addressing the media at the Opposition Leader’s Office in Colombo, Chief Opposition Whip and Kandy District MP Lakshman Kiriella said that the Attorney General could not be forced by the government to spare certain individuals. “The report of the Presidential Commission recommends that legal action be taken against the former head of State Intelligence Service, senior DIG Nilantha Jayawardena and the former President Maithripala Sirisena. But the government does not implement those recommendations.

“The Cardinal says that before the election, Gotabaya Rajapaksa promised to prosecute all those responsible for the carnage. After release of the PCoI report the Cardinal has been told by the President that he could not implement some recommendations therein because he would lose his popularity. That is wrong. He cannot do so, it is the job of the Attorney General. It is not the President who implements the law of this country but the Attorney General. The President has no powers to that. “Upon the receipt of the PCoI report the government appointed a cabinet subcommittee under Minister Chamal Rajapaksa to study the report. Now, the government implements the recommendations of that sub-committee which has recommended to select whom should be prosecuted and who should be left out from the original list of persons identified by the PCoI as responsible for the terror attacks.

“The PCoI recommendations are not being properly implemented. We demand that the government should implement all recommendations of the PCoI. Victims demand the same. The Church and the Cardinal demand the same. The AG should prosecute all identified by the PCoI and let the judiciary decide who is guilty and who is not. The President cannot interfere in selecting the list to be prosecuted. That amounts to the Executive interfering in the matters of the judiciary.”

MP Kiriella said that consequences of the October 2018 constitutional crisis and 52-day government had paved the way for the Easter Sunday terror attacks. “That crisis started on 26 Oct., 2018. Thereafter, the then President Sirisena sidelined the UNP, which was the main party in the Yahapalana government. The National Security Council met without anyone representing the UNF government. The NSC was even attended by some SLFP MPs. President Sirisena took over the Ministry of Law and Order under him in addition to the Defence Ministry. The first move against the Yahapalana government was the 52-day government; the second was the Easter Sunday attack. Nilantha Jayawardena received all information and intelligence from India with exact dates, places and even the names of the attackers. He says that he did not pass that intelligence on to President Sirisena, who was the Minister of Defence. That was an offence. When the PCoI asked Jayawardena to surrender his mobile phone, he did so after deleting all its records. That too is an offence. Former President Sirisena says that he did not know anything about the matter because he had not been informed of it. Yet, the PCoI determined that he was responsible. The government should let the Attorney General implement the recommendations of the PCoI by prosecuting all who have been identified as persons responsible for the Easter Sunday carnage.”