SLPP was created to fulfil a need of this era – President 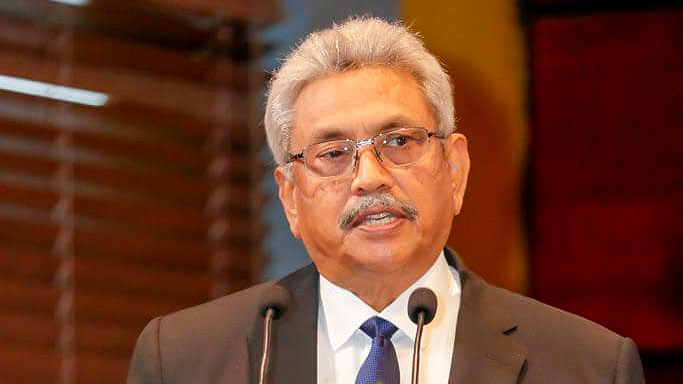 President Gotabaya Rajapaksa says that the SLPP was created to fulfil a need of this era and its ultimate goal is to accomplish the aspirations of the people.

The President made this remark in a video message released on the occasion of the fifth-anniversary ceremony of the Sri Lanka Podujana Peramuna (SLPP) held at the Nelum Pokuna Theatre, on Tuesday (November 02).

He said the vision of the SLPP is clear and therefore objectives are target-oriented, and the President also said that already an indelible role is being played in the present in order to build a united, sovereign, and prosperous nation.

President Rajapaksa recalled that the then government, which had vowed the people to promote good governance, had not only deliberately undermined national security, a basic requirement of a country’s existence but had also opened the country to a massacre by creating an environment for extremist religious groups to nurture. National security, which was the main demand of the people of the country, had been established today and the existing mistrust and despair had been eradicated, he continued.

President Rajapaksa said that the country is still experiencing the devastating effects of the Central Bank bond scam. The President said that those who are responsible for this scam are also responsible for the increased cost of living and said that even the economic experts have shown how development was put on hold and the manufacturing economy was ruined at that time.

The Sri Lanka Podujana Peramuna was created with the blessings of the people when the society was unjustly oppressed. The President recalled that as a fresh political party, the Sri Lanka Podujana Peramuna had received massive public support and that the National Policy Framework ‘Vistas of Prosperity’ for a people-centric economy was achieved through the party’s determination and commitment.

Today, the country is open to fair and just criticism. The illicit drug menace as well as the underworld activities linked with it has been brought under control. The difficult decision to switch to organic farming with a focus on green agriculture has been taken for the benefit of future generations. Steps have been taken to enable the intellectuals to uplift the country by improving the public service and a programme to provide employment opportunities to 100,000 underprivileged youths has also been launched. President Rajapaksa said the government is taking challenging decisions for a local economic model that will strengthen the people-centric economy with the ultimate hope of a prosperous country and that the political practice of the Podujana Peramuna is a decisive factor in this.

Meanwhile, Prime Minister Mahinda Rajapaksa, who spoke at the 5th-anniversary celebrations of the SLPP, said the party needs to do better by its voters, who are currently facing hard times.

“We do politics with patience and in a dedicated manner until we come to power. Then we move away from politics and look on, after coming to power.”

The fame and the popularity of a party do not depend on the power of the government, the Prime Minister stressed.

“I believe that the teachers’ strike was exacerbated due to us withdrawing from politics during the past few days. We must understand the voice of the public and we should listen to them. The people who voted for us are now in a difficult situation. We are well experienced in facing such difficult periods. The people scold the government even for the mistakes not committed by the government. People can scold and burn effigies. But we need to approach the people.”

Speaking further, PM Rajapaksa said the SLPP always stands for harmony which is its heritage that it acquired from the Sri Lanka Freedom Party. “The SLFP always stood with leftist political parties. They worked despite differences. Even the SLPP should think about this. Some parties might not have parliamentary representation. They can be small. What matters in politics is the aim, not the size. We cannot forget those who stood with us at difficult junctures. They go beyond mere supporters. They work with us to fulfil one aim. Protecting that harmony is a responsibility of us as the main party.”

The Prime Minister further stated: “The [presidential] election in which Gotabaya Rajapaksa was elected as the President was a strength to us. Most of the youths, who avoided politics, voted and placed their trust in him. We must understand what the public expects from us after giving such a victory. The youth in this country decorated the streets and walls when we won. We don’t see them anymore. We must see if all those young people are standing in queues to get passports and leave the country.” In conclusion, PM Rajapaksa reminded the SLPP members that they should engage in a political campaign that helps to give the youth a better future here in Sri Lanka.