Sovereignty of Sri Lanka would not be betrayed – President 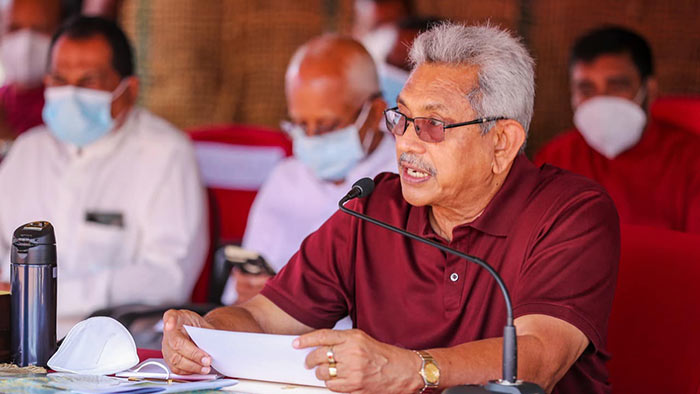 The Government does not wish to be associated with the power struggles in the Indian Ocean region by the global giants, President Gotabaya Rajapaksa said.

He noted that the sovereignty of Sri Lanka would not be betrayed by allowing other countries to achieve their geopolitical needs by introducing separatism under the guise of power devolution.

The President made these remarks addressing the gathering at the beginning of the 16th “Discussion with the Village” program held at the Derangala Maha Vidyalaya premises in the Kiriwelkele North 3rd Step Grama Niladhari Division which falls within the limits of Pitabeddara Divisional Secretariat Division in the Matara District on Saturday (27). “We will face the Geneva challenge without fear. We will never succumb to pressures. We are a free nation. We will not be a victim of big power rivalry in the Indian Ocean.” President stressed.

The President also stated that much of his time was spent on righting the wrongs of the previous Government which in turn caused various issues.

He observed that the foundation has been laid for the country to move forward while correctly identifying and resolving the problems faced by the people for a long time now.

“The Government is bound to meet the basic needs of the people. It is not only the responsibility of the Government but also that of the officials as well. This foundation will strengthen the economy in a manner that is most effective for the country and will prioritize addressing the issues of the rural people,” he explained.

“Foreign and local forces who cannot stand this progress and the mafias which support them are misleading the public. The devastation caused in the last five years can repeat if the true progress is left unnoticed and you choose to believe lies and misled yourself. If you give into those lies the damage could be irreversible,” President said.

“National security was ignored due to the wrong priorities of the previous Government. The Easter Sunday attack was a result of that. War heroes were imprisoned on baseless charges. The country’s sovereignty was compromised by co-sponsoring the Geneva resolution. The country was thrown into a crisis by entering into agreements such as the MCC Compact and the Eastern Container Terminal Agreement,” the President observed adding those were being resolved at the moment.

The President highlighted that those who created and supported all the above issues are now protesting against the present Government adding that several prominent figures from the former government pretend as if they were never in power. The President observed that although it was not his way to respond to baseless allegations, now he has to answer and expose lies.

Home » Sovereignty of Sri Lanka would not be betrayed – President