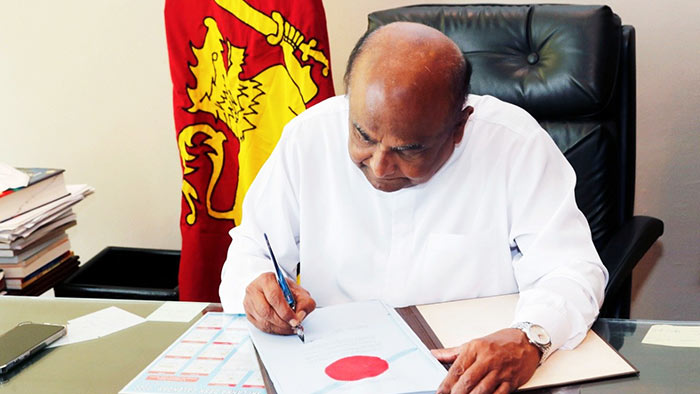 The 21st amendment to the constitution will take effect from today (October 31) as Speaker Mahinda Yapa Abeywardena endorsed the certificate on the 22nd Amendment to the Constitution Bill passed by a special majority in Parliament of Sri Lanka.

The 22nd Amendment to the Constitution Bill was presented to the Parliament on August 10, 2022, by Minister Dr. Wijeyadasa Rajapakshe.

Then, according to the Supreme Court determination related to the petitions against the bill, amendments were made at the Ministerial Consultative Committee on Judicial Affairs and approval was obtained.

On October 20 and 21, the debate on the second reading of the 22nd Amendment to the Constitution Bill was held.

At the end of the second reading, there were 179 votes in favor and 1 vote against.

After that, in the voting held for the third reading of the bill, 174 votes were in favor and one vote was against.

Dr. Wijeyadasa Rajapakshe, who was appointed the Minister of Justice, Prison Affairs & Constitutional Reforms, later presented a government Bill to the Cabinet of Ministers in his ministerial capacity, which was referred to as the 22nd Amendment.

The Supreme Court, delivering its determination, ruled that the 21st Amendment put forward by the SJB cannot proceed further without a public referendum.

In such a backdrop, the Cabinet of Ministers gave the approval to publish the 22nd Amendment presented by the Justice Minister in the government gazette.