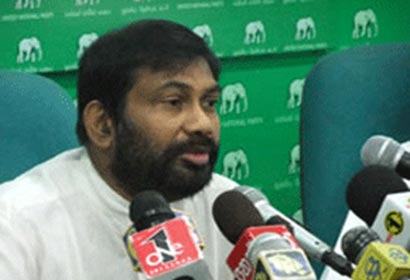 Sri Lanka is looking at the possibility of controlling droughts and floods through the use of Chinese technology, local media quoting Minister of Primary Industries and Social Welfare Daya Gamage said on Wednesday.

Speaking at the signing of project agreements under the World Bank’s Agriculture Sector Modernization program in the capital, Gamage said the agriculture sector in Sri Lanka could contribute to the country’s overall economic growth if it is able to stop droughts and floods just like it is done in China.

He said experts from the Chinese Academy of Meteorological Sciences had already carried out a study on the formation of clouds above Sri Lanka and the findings will be handed over to the government soon.

“Sri Lanka could earn more export revenue from crops such as cinnamon and ginger if such new industries are developed,” the minister said.

“We can learn from China,” he added.

Prime Minister Ranil Wickremesinghe, speaking at the event, stressed the need for modernizing Sri Lanka’s agricultural sector so as to make it a stable industry.

The prime minister added that modernizing rural agriculture is essential as such a growth would help improve the rural economy, which in turn would strengthen the country’s economy.

Sri Lanka’s Disaster Management Center said in its latest report that over 600,000 people had remained affected by severe droughts in at least 11 districts of the island country due to the shortage of rains.