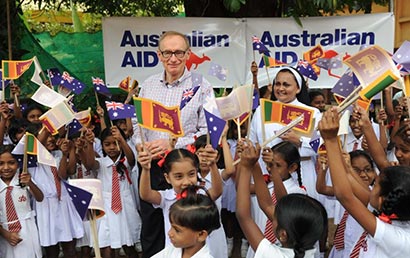 External Affairs Minister Prof. G.L. Peiris, held bilateral talks with his Australian counterpart Senator Bob Carr, on the evening of 16th December at the Ministry of External Affairs prior to the inauguration of the first meeting of the Joint Working Group on People Smuggling and Transnational Crime on 17th December at the Ministry of Defence and Urban Development.  Minister of Foreign Affairs of Australia was on an official visit to Sri Lanka at the invitation of Prof. Peiris from 14th to 17th December 2012.

The bilateral talks were marked by friendship, mutual respect and understanding.  Both sides noted with satisfaction the close dialogue between the two countries which had injected new strength and vitality to a multifaceted relationship and the visit was viewed as a further reinforcement of these close ties.  Building on this positive drive emphasis was placed by both parties on enhancing bilateral co-operation in a number of spheres spanning defence, trade, investments tourism, culture, agriculture, education etc.  The visiting Foreign Minister called on President Mahinda Rajapaksa on 17th afternoon and also had comprehensive discussions with the Minister of Economic Development and Secretary of Defence and Urban Development.

The highlight of the talks were the keen support extended by Australia to make a success of the Commonwealth Heads of Government meeting (CHOGM) in Colombo in 2013.   Prof. Peiris gave an update on the comprehensive work programme being prepared for hosting the meeting and Senator Carr extended further assistance in sharing their knowledge of the Perth Meeting as the previous chair.  Australia also committed to send their top entrepreneurs to participate in the Commonwealth Business Forum.

The Australian Minister of Foreign Affairs appreciated the efforts taken by Sri Lanka to combat people smuggling operations and agreed to work closely with the defence establishment of Sri Lanka to strengthen the established links on law enforcement co-operation in combating transnational crime and pledged further training opportunities for mid career officers in the armed forces of Sri Lanka.

During the bilateral discussions, both parties highlighted the strong momentum for expansion in bilateral trade and investment relations and identified a number of important complimentaries and prospects accruing for a strong bilateral partnership.  In providing a further impetus to facilitation of bilateral trade Prof. Peiris proposed the initiation of a Joint Commission to be setup between the two countries for exploring the accruing opportunities to which the Australian side responded positively.

Sri Lanka elaborated on the constructive initiatives taken with regard to the implementation of the recommendations of the LLRC report and Australia acknowledged these steps taken in a positive direction.

Sri Lanka thanked the Australian government for the AusAID assistance which had contributed largely for the socio economic development of the country and the visiting Foreign Minister was happy with the utilization of Aus-Aid funds according to the government priorities and also announced further assistance to complete the demining proves in the North.

Senator Carr made a reference to the contributions made by the vast Sri Lankan expat community domiciled in Australia for the country’s progress while Prof. Peiris thanked the Australian government for relaxing the procedure for visa requirements in facilitating more Sri Lanka students to seek higher education opportunities in the State of the Art higher education institutions in Australia.

The first session of the Joint Working Group co-chaired by Secretary/Department of Immigration and Citizenship of Australia  Martin Bowles, and Secretary/Ministry of Defence and Urban Development of Sri Lanka  Gotabaya Rajapaksa,  opened a new chapter in defence and security  relations between the two countries, enabling an annual  dialogue to discuss matters of mutual interest focused particularly on addressing the root causes, strengthening security and law enforcement co-operation, training & capacity building and public awareness campaigns to combat people smuggling.

During his brief stay in Sri Lanka the Australian Foreign Minister visited Galle and inspected the AusAID projects being carried in the South to advance the living standards of the people and both Ministers had a Joint Press Conference on 17th afternoon in affirming their interests to work towards a very progressive and vibrant relationship for the benefit of the people encompassing issues of contemporary relevance.