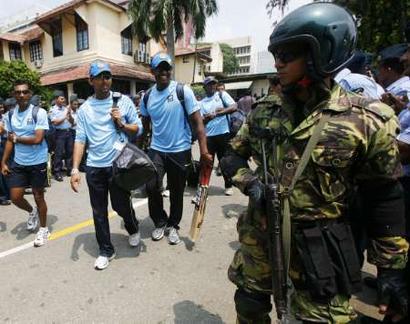 Sri Lanka, co-host of the tournament with Bangladesh and India, is hosting 12 matches including the quarter-finals and semi-finals.

Inspector General of Police Mahinda Balasuriya said security was tight for the biggest sporting event Sri Lanka has hosted since the 1996 World Cup, all the more so since the island nation’s military defeated the Tamil Tiger separatists in May 2009.

“This is a good opportunity we get after defeating terrorists, so cricket-loving people should behave well,” Balasuriya told a press conference.

Balasuriya said police will check spectators at the entrances for firearms, sticks, poles, cans, tins, any form of firecracker, all sharp-edged items and alcohol. People under the influence of alcohol will not be allowed inside.

“We will not allow anyone carrying banners, posters or placards defamatory to any country, any person or any race. The police will take action against those violators, we will confiscate the items.”

Police, including those specially trained for VIP protection, along with the military will handle the security for the venues and players. He declined to say how many would be involved.

Sri Lanka had an ugly experience in India at the 1996 semi-finals of the World Cup, as the home team failed to chase down a victory target.

The crowd at Kolkata’s Eden Gardens threw bottles on the ground and rioting broke out in the stands.

The acts forced match referee Clive Lloyd to declare Sri Lanka winner by default before the match was over when India were on the verge of defeat. (Reporting by Ranga Sirilal; Editing by Bryson Hull)