Sri Lanka Investigates regarding death of a leopard in Hatton 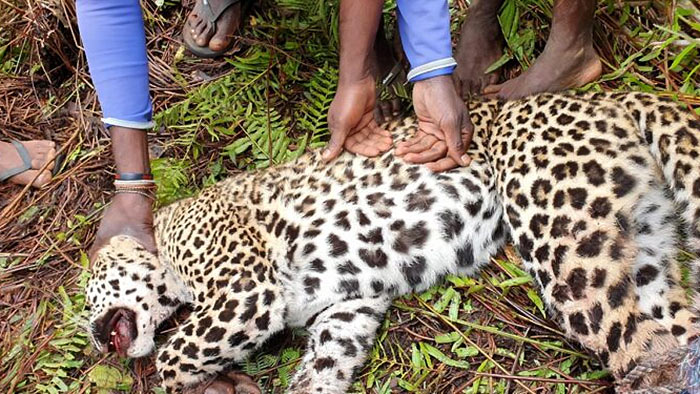 Sri Lanka’s Minister of Wildlife Mahinda Amaraweera has instructed the Secretary to the Ministry to conduct a probe over the death of a leopard in the Summer Hill section of the Hatton Wanaraja Estate.

Accordingly, a team headed by an Additional Secretary is on its way to Hatton to investigate the killing of a leopard, The Ministry of Wildlife said.

The ministry said that action will be taken if wildlife officials are found to be responsible for the animal’s death.

A leopard which had been caught in a trap attached to a tree on Saturday night (August 06) had died from injuries despite the efforts by wildlife officers to cut down the tree and rescue the animal.

The tiger was caught in a trap set up by some individuals to hunt wild boars and leopards roaming in the Summer Hill section belonging to the Hatton Wanaraja Estate.

It is reported that the leopard had climbed a nearby eucalyptus tree in an attempt to get out of the trap and that by the time the wildlife officers arrived and cut down the tree to rescue the leopard it was already dead.

In order to save the tiger, the wildlife officials cut the tree and tried to take the tiger to the ground, but the tiger had already died.

Mr. Prabhash Karunathilaka also said that when he tried to rescue the tiger, its abdomen was cut and injured.

Wildlife Conservator of Nallathanniya Wildlife Office said that the facts regarding the dead leopard will be reported to the Hatton Magistrate Court and the remains will be taken to Randenigala Veterinary Hospital for post-mortem examination.

Home » Sri Lanka Investigates regarding death of a leopard in Hatton