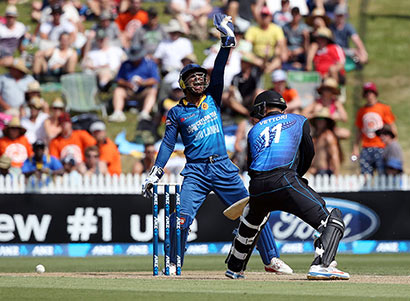 The seven-match series is level at 1-1 after New Zealand won the first match by three wickets and Sri Lanka won the second by six wickets.

Sri Lanka made one change to its lineup for the match, opting for a three-pronged seam attack by naming Dhammika Prasad in place of spinner Rangana Herath.

New Zealand made two changes, swapping fast bowlers Adam Milne and Trent Boult for Tim Southee and Mitchell McClenaghan as it continues a rotational selection policy in the leadup to the World Cup.