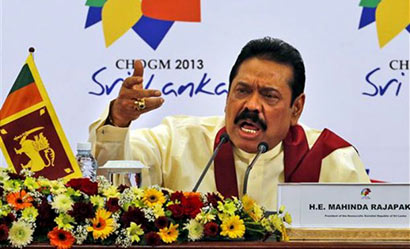 Mahinda Rajapakse, President of Sri Lanka, took over as Chairperson-in-Office of the Commonwealth of Nations at a Meeting (CHOGM) held in Colombo, Sri Lanka in November 2013. He presides over 53 nations with an estimated population of 2.245 billion covering a landmass of more than 29,958,050 km2 (11,566,870 sq mi) – a third of world population.

There are some pertinent questions that the Chair of the Commonwealth of Nations may like to consider answering:

Instead of being at the receiving end of an Inquisition at UNHRC he can turn the circus around by asking the very nations that are bellowing for his neck to subject themselves to a process of accountability and catharsis and come clean on horrendous crimes committed in the past under deceptive jingles and catchphrases such as ‘white man’s burden’ and ‘civilizing the heathens’.

The oppressed of former British colonies are entitled to an apology and reparations. If Israel can put a price tag on atrocities committed in the past there is no reason why former colonies should be denied this chance.

An International Claims Tribunal must be established without delay to inquire into crimes against humanity committed by Britain and other European nations in their colonies during the last 500 years with a mandate within a limited time frame to spell out recommendations on payment of adequate compensation and other relief measures. This measure is long overdue.

President Rajapakse will enter history books if he were to take a stand on behalf of all the oppressed nations that were once victim of cruel and inhuman British colonial rule and demand on their behalf apology, compensation and justice for the victims.

If President Rajapakse decides to belong to the right side of history he  will stake his claim to be placed alongside other heroes of the oppressed world such as Patrice Lumumba, Kwame Nkrumah, Ho Chi Minh, Sukarno, Aung San, Nethaji Subhas Chandra Bose, Mao Tse Tung and our own Sri Lankan national hero Anagarika Dharmapala.