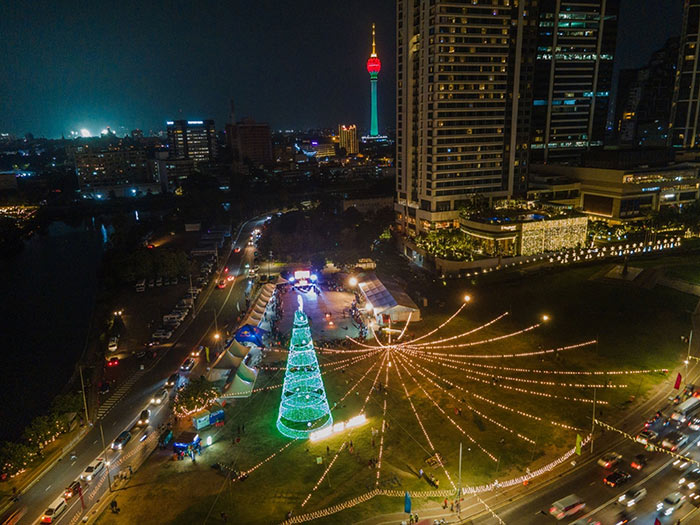 Colombo City is lit up for Christmas on December 22, 2022 in Colombo, Sri Lanka. (Photo by Thilina Kaluthotage / NurPhoto via Getty Images)

Sri Lanka’s military is holding a Christmas carnival at the seafront site of an anti-government protest that forced the country’s previous president to flee and quit office earlier this year.

Thousands marched in Sri Lanka’s largest city and set up a tented protest camp in April amid anger at the government’s handling of a severe economic crisis. Protesters named the site “Gota Go Gama”, a dig at former President Gotabaya Rajapaksa who was forced to resign in July.

This week Sri Lanka’s powerful military converted the site adjacent to the presidential office into a Christmas-themed carnival ground with a large artificial Christmas tree, a bus featuring carol singers and dog shows.

Sri Lanka descended into its worst economic crisis in seven decades this year after its foreign exchange reserves ran dry, leading to shortages of essentials, including food and fuel, which stoked widespread unrest culminating in Rajapaksa’s exit.

Pakiasothy Saravanamuttu, executive director of Colombo-based think-tank Centre for Policy Alternatives, said the celebrations at the former protest site were a show of strength by the government of President Ranil Wickremesinghe, who took over after his predecessor quit.

“First and foremost, it wants to establish that it is very much in control and that this was the headquarters of the great Aragalaya, they have reclaimed the space,” Saravanamuttu said, referring to the name of the protest movement.

Brigadier Nilantha Premaratne, a military spokesperson, said the location was chosen because it was an area where Sri Lankans gathered during the festive season.

“There is no other special reason,” he said.

Sri Lanka reached a preliminary deal with the IMF for a $2.9 billion bailout in September, and Wickremesinghe has warned tough economic reforms are necessary.

But activist Thiridu Uduwagedera said the Wickremesinghe administration did not have popular support to hold the celebrations at “Gota Go Gama.”

“People will certainly continue the fight until we get rid of this government,” he said.