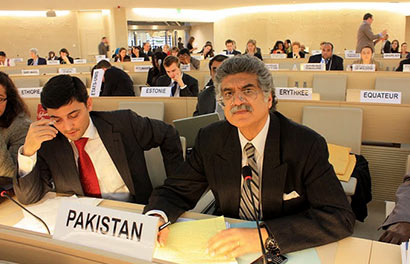 When a country not just votes for Sri Lanka against the tides but goes the extra mile to eloquently deliver a speech giving reasons why they are voting against the US sponsored Resolution, that country and in particular the head of that delegation needs to be thanked and felicitated far before thanking nations that abstained for their own self-serving compulsions. Sri Lankans listened with admiration while Mr. Zamir Akram showed how Pakistan had done its homework to highlight reasons that the Resolution depicted duplicity, bias and double standards and Pakistan gave the punch that should have come from Sri Lanka’s delegation in reminding the Sponsors of the Resolution their own track record of human rights violations that remain without acknowledgement or accountability running over centuries. It is therefore, suggested that Sri Lankan organizations invite Mr. Zamir Akram to deliver a speech in Sri Lanka and to felicitate him for the magnanimous manner Pakistan showed solidarity with Sri Lanka. In our eyes, Pakistan has been a true friend.

Text of Speech delivered by Mr. Zamir Akram, head of the Pakistan delegation to the UN Human Rights at the 25th session and before voting on Sri Lanka

Pakistan is opposed to country specific resolutions in principle. This is because such resolutions are ineffective and counter-productive. Consent of the country concerned is imperative for tangible results to promote and protect human rights. Pakistan played a key role in the 2009 Resolution against Sri Lanka with the consent and cooperation of that country. This resolution achieved positive results. Sri Lanka fully cooperated with the human rights machinery. It also demonstrated continued and tangible progress on the ground in addressing issues related to the reconciliation process including accountability within the framework of Sri Lanka’s domestic reconciliation process – the LLRC.

Sri Lanka has a long and powerful history of democracy. It has suffered for 30 years due to brutal terrorism by the LTTE an internationally recognized terrorist organization. Eventually it has succeeded in overcoming this menace of terrorism and separatism.

The international community including the HRC should help and support Sri Lanka to heal its wounds and achieve reconciliation and lasting peace. It should not add fuel to the fire. Interference in the internal affairs of Sri Lanka is unacceptable. No self-respecting country would agree to the intrusive measures advocated in this resolution in particular operative paragraph 10 of the Resolution is inconsistent with the principles and purposes of the UN Charter which calls or respecting the sovereignty and territorial integrity of all States.

We strongly believe that reference to international investigation as a monitoring and investigative role of the OCHCR in operative paragraph 10 and signaling out the northern provincial for preferential treatment in operative paragraph 6 are clear violations of the sovereignty and territorial integrity of Sri Lanka. Such a preferential focus is inconsistent with paragraph 9 of the current drat which reaffirms that all Sri Lankans are entitled to full enjoyment of their rights regardless of religion, belief or ethnicity. This highlights the inherent contradictions contained in this draft resolution.

Operative Paragraph 10 vests the OCHR with an investigative mandate in violation of HRC Resolution 60/251.

The OCHR does not have the capacity or the resources to do so as we have just heard from the Secretariat. The budgetary implications for the proposed mechanisms are also not clear. Due to the lack of clarity and the controls of the mandated activity in operational paragraph 10. Mandated activities need to be carried out through the regular budget. Specivity of mandated activity are a pre-requisite with regard to the budget. Again something we have just heard from the Secretariat and my delegation would like to know from where these funds will come because if these funds are to come from countries that have sponsored this Resolution it will obviously be seen as a process that will be tainted.

Mr. President operational paragraph 10 also introduces a time frame into the investigation of alleged violations through reference to the period covered by the LLRC which may be taken from 2002 to 2009. This timeframe however does not take into account the entire duration of the conflict which spanned 30 years and thereby excludes the atrocities and violations of international humanitarian law and international human rights laws committed by the LTTE terrorists prior to 2002. No inquiry can be justifiable and balanced without taking into account the entire duration of the conflict.

The allegation of the absence of a credible domestic process to address issues of accountability is not substantiated by evidence given the range of processes and their implementation within the framework of the reconciliation process including the LLRC of which the Council has been briefed in detail by the Sri Lanka delegation.

Mr. President, this Resolution is about politics not about human rights.

It selectively targets the Government of Sri Lanka but fails to hold to account the LTTE terrorists who indulged in mass murder of innocent people for 30 years.

Moreover, the main sponsors of this Resolution are hardly in a position to hold Sri Lanka to account given their own track record of human rights violations. For more than a decade they have and continue to indulge in a consistent pattern of gross human rights violations including illegal renditions, incommunicado detentions, torture and extra judicial killings all behind the smokescreen of fighting terrorism.

While maintaining a conspiracy of silence over their own misdeeds these countries arrogate to themselves the right to sit in judgement over others.

This Council must therefore reject such duplicity.

For these Reasons, Mr. President and as the first step Pakistan calls for the deletion of operative paragraph 10 of this Resolution.

I thank you Mr. President.

(Pakistan requested a vote on paragraph 10)

We recall how the Sri Lankan cricket team toured Pakistan as a gesture of goodwill when the Indian cricket team pulled out of the Pakistan tour. The Sri Lankan Cricket team came under terror attack when the bus the cricketers were travelling were shot upon but the bus driver – Mehar Mohammad Khalil who became Sri Lanka’s hero, sped the bus with the cricketers to safety. M. Khalil and family were invited to Sri Lanka on a holiday and felicitated for his heroic gesture.

Sri Lankans must now pay similar gratitude towards another Pakistani who stood up for Sri Lanka in the international arena.