Sri Lanka’s War on Terror: A Scorecard unmatched and Envied 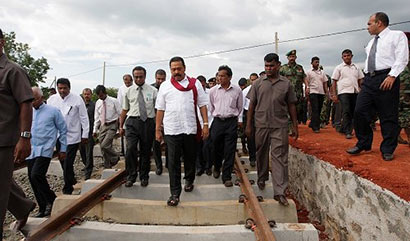 Sri Lanka showed how to win a War on Terror. Sri Lanka became the first and only country in the world to do so. Sri Lanka has also showed how to resettle, reconstruct demine and rehabilitate and even reintegrate former armed cadres another first of its kind. Sri Lanka offered a Presidential Pardon to all 594 LTTE child soldiers a feat no other country would consider. Sri Lanka has also shown development to areas that LTTE controlled for decades an achievement envied by the very parties that funded Sri Lanka’s terror. That last war victory came at the sacrifice of 6,261 personnel of the Sri Lankan Armed Forces and 29,551 who were wounded since July 2006. In total close to 30,000 brave men laid down their lives to rid Sri Lanka of terrorism. Those that were on the other side surely have no right to preach now.

Sri Lanka’s Government did not order its military to invade a sovereign nation. Sri Lanka’s military took on an internationally proscribed terrorist group banned by 32 nations after enduring and suffering 3 decades of terror. That military option was taken following failures by the UN and all those that claimed to have the solutions to Sri Lanka’s conflict. For 3 decades LTTE killed every day, every month and every year, Sinhalese, Tamils and Muslims homes mourned their dead successive Governments were coerced and feeble enough to continue peace talks, ceasefires, negotiations and even sign an agreement that demarcated territory for the LTTE. Would these entities be satisfied if LTTE were not militarily eliminated and LTTE were allowed to continue to kill every day, every month and every year because it secures their jobs and their careers?

Anyone chirping ‘reconciliation’ needs to realize that Sri Lanka’s War on Terror was against Terrorists and not Tamils and it is not Sri Lanka’s problem that parties associating themselves with the LTTE are confusing Terrorists and Tamils as being the same. Sri Lankans do not wish to reconcile with Terrorists while Sri Lankans have had no problems living with Tamils. The confusions need to stop. We do not think it correct to presume that 295,873 Internally Displaced People (IDPs) were all LTTE and that was the number we continue to say were ‘civilians’ inspite of doubts!

LTTE terrorists killed over 250 Tamil leaders (politicians, academics, clergy, public servants, police officers) as well as the leaders of the other armed Tamil militant groups, scores of LTTE cadres who did not follow LTTE doctrine and even injured LTTE cadres who were a headache to maintain!

Let’s talk numbers. Every nation, every leader, every organization using the media at their disposal is challenged to show if they have or can better Sri Lanka’s achievements.

Show us a country that has done better than Sri Lanka’s post conflict achievements after suffering 3 decades of terrorism as Sri Lanka battles the same nations that supported and funded terror who are now green with envy.

Inspite of all this and more the response is eternally ‘not enough is being done’. It is good for the soldiers to toil and labor and help with infrastructural development but it is not good enough for them to be deployed when a nation has every right to deploy its troops where they like.

How many critics are aware of what Sri Lanka and its people suffered?

Have the critics answers to why

An armed conflict was what Sri Lanka’s conflict was described. Civilians were with the LTTE. We cannot say how many of them were voluntarily with the LTTE or kept by force. We can only guess. Similarly, we can only guess how many took part in combat by force or voluntary and perished as a result too. Nevertheless, the 40,000-125,000 figures is without a single name, without any relations, without dead bodies, graves or skeletons and until such time we can only say collateral damage did occur, we cannot say by whom, but obviously there were deaths, but these deaths were not intentional and not anywhere near the numbers alleged, if so why would the Armed Forces brave fire and landmines to save close to 300,000 people with the knowledge that among them were many LTTE in civil other than the 11,000 LTTE who gave themselves up as terrorists. For a minimum collateral damage minus any evidence of actual deaths, it is unfair that Sri Lanka is being hounded every year at the UN by a human rights head that had shown bias against Sri Lanka all throughout her period in office.

Since 1950s the US has militarily invaded Puerto Rico, Lebanon, Cuba, Cambodia, Dominican Republic, Grenada, Iraq, Afghanistan, Panama, Somalia, Haiti, Yugoslavia. US has gone to war with Korea, Vietnam and opted to engage in proxy wars arming rebels and armed groups against Russia, Iraq, Syria, Laos, Libya, Philippines, Serbia – 70 nations have been invaded by the US since 1776. Together with NATO, US has become the military wing of a handful of people who are funding both sides of a conflict and benefiting by sending innocent troops to die and civilians who get killed because of collateral damage. Throughout all of these proxy wars, invasions and double standards the UN supposedly meant to maintain peace takes out a book of international laws and conventions and reads it out to only one party and then accepts accolades for their achievements! What is even more amusing is how the aggressors, the violators and those that control and arm the proxies are given red carpet welcome within the halls of the UN and end up passing Resolutions against the oppressed! These are the hypocrisies that prevail.

What the nations that militarily invaded and destroyed civilian infrastructure do is never even mentioned or discussed.

The UN says that between 1950-2005, 1.3billion deaths could have been avoided – why didn’t the UN avoid them using their book of international rights? The UN also says 82million of these deaths were from deprivation. UN thinks it can come up with a report claiming it has failed Sri Lanka but what about the 1.3billion people it failed and the 82million that were deprived for these failures all enters UN’s scorecard and that should suffice to say that this entity running on funds by the very sources that are creators of the world’s mayhem should now close shop and the Third World leaders need to show more leadership by initiating a global entity that does not function the way the UN has.

We have had close to 200 foreign dignitaries arrive in Sri Lanka after 2009. Those that spoke to and saw the same lot of people funded from overseas to carry out a tarnishing campaign do not have nothing much to say but those like some Canadian Parliamentarians, the Australian Foreign Minister, British MPs Ian Paisely and Lord Naseby who actually met ordinary people and spoke to them have given a very opposite version of things. So what does the world listen to? Obviously when the same players who desire and fund conflicts own the media channels it is natural that a dismal and distorted version of things would be promoted and we have little channels to get the real story out.

Yet the bleak pictures being projected by the same culprits contradicts the statements of others ADB forecasts that the Sri Lankan economy will expand 7.5% both this year and next, one of the fastest growth rates in the region…. “With the per capita income at $3,280 in 2013, I believe the Government’s target of reaching $4,000 by 2016 is realistic. This means that Sri Lanka will make the transition from a lower middle income country to an upper middle income country. The next target will be to reach high income status. This would make Sri Lanka the first country in South Asia to break through the middle income trap.”

It is for the people themselves to realize that we should not become pawns for people’s agendas. As Sinhalese, Tamils and Muslims we need to realize that Sri Lanka is our country to protect and we should not go crying to others wrongfully thinking they have solutions that would benefit us. We may be in for worse surprises than what we experienced from LTTE. This thought must always be in the back of our minds. There is no perfect country, no perfect leader, no perfect political party and no politicians are perfect and as humans neither are you nor I.