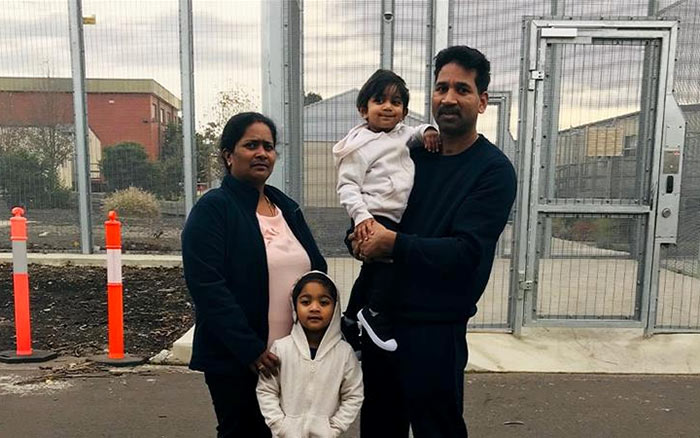 A Sri Lankan Tamil refugee family, including two toddlers born in Australia, remain in detention thousands of kilometres off the country’s northwestern coast, despite a United Nations request that the family be allowed to return to the rural Australian town where they have lived for the past three years.

The young family of four was suddenly removed from their home in an early morning raid by immigration officials in March last year, prompting a nationwide outcry in a country known for its hardline approach to asylum seekers and use of offshore detention.

The family is currently being held on Christmas Island, an Australian territory south of Java.

Immigration lawyer Carina Ford said a hearing on Wednesday will determine the next steps in the case but a final hearing could be months away.

The parents, Nadesalingam and Priya, met and married in Australia after arriving separately by boat in 2012 and 2013, and seeking asylum. They were detained after Priya’s visa expired.

Although born in Australia, the couple’s daughters Kopika, aged four, and Tharunicca, aged two, do not have the right to Australian citizenship by birth.

An attempt to deport the family was made in August after the asylum applications of Kopika and her parents were rejected, but a Federal Court judge granted a last-minute injunction forcing their plane, which was en route to Sri Lanka, to land in Darwin.

Ford said the injunction was granted because two-year-old Tharunicca had never been assessed for a protection visa.

Earlier this month, the United Nations High Commissioner for Refugees requested the family be moved out of detention and allowed to return to their home in Biloela in the state of Queensland, giving the Australia government 30 days to comply.

While Ford said there was still time for the Australian government to act on this request, they were not obligated to do so.

“To date, I haven’t received any indication that they will be released,” she said.

A spokesperson from the Department of Home Affairs told Al Jazeera it was aware of the interim request.

“The family are residing on Christmas Island and will remain there while the judicial review proceedings are before the court,” the spokesperson said.

Ford said that while most failed refugee applicants have a very low profile, this case was unique because of the “sheer amount of publicity” surrounding it and the support the family had received from ordinary Australians.

Angela Fredericks, a close friend and neighbour of the family since they moved to the small town of Biloela, began a petition to Peter Dutton, Australia’s Minister of Home Affairs, which has so far received more than a quarter of a million signatures.

“I just saw what beautiful genuine people they were,” Fredericks said.

“Nades (Nadesalingam) was such a hard worker and just so willing to give back … they come from such horrific circumstances, and they just wanted a peaceful life and to pay back the community that had taken them in.”

Fredericks visited the family on Christmas island last month and had previously visited them while they were detained in Melbourne.

She said they were staying in a “tiny room” sharing two bunk beds between the four of them.

She described a communal kitchen and a play area for the children, but the bathrooms were outside the compound, which made it difficult for the family.

“It blows my mind, just the ridiculousness of it all,” she said. “Even just the expense – throw compassion away, but still, what are we doing? The amount it has cost Australia since they were taken is just absurd.”

Nine out of 10 Tamils rejected

Fredericks said 30 other Tamils were on the same flight as the family and were deported on the same day the court order allowed Nades and Priya to stay.

He said about nine out of 10 cases are rejected despite the immense danger Tamil families face in their home country.

In a study released last month, the International Truth and Justice Project detailed “systematic brutal torture and sexual violence” against men and women detained over the last decade.

“It’s a dangerous place for Priya and Nades and the two children to be, and we just hope that all these recent developments will be taken into account,” Mylvaganam said.